"Responsibility of the Crown," by G. Scott Huggins 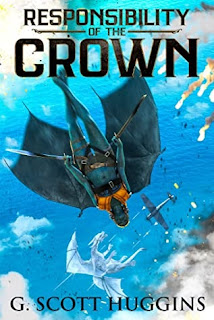 An Amazon Associates link
I have read a lot of  Scott Huggins’ work over the years, with delight. This was not one of those experiences.

On a world dominated by a great ocean, three different cultures are brought into conflict: The Consortium, a technologically advanced, expansionist civilization, with both land and sea power; the Grove, a merchant nation with massive trading ships, that journey for decades between stops at the home port; and, Evenmarch, which blends dragon and human citizens with reliance on supernatural forces. These are not the only forces at play, but they form the background  against which the characters play out their own drama.

I found two bizarrely disruptive changes from what I have come to expect of this author: first, there are huge gaps in the narrative; second, the protagonist has an irritatingly lumpy progression in her character arc.

The first gap in the narrative comes at the very beginning. Without ANY preparation, we are tossed into an action scene involving Responsibility and Zhad. We are clued in to the fact that Zhad is blind, by the statement that his eyes are white, and his demand that Responsibility tell him what she sees, but we are given NOTHING to tell us about who, or what, or even where Responsibility is, or the significance of her name.  In the “Acknowledgments” section, the author mentions two prior works involving the character, and perhaps all the necessary back-story is contained there. However, none of that was available to me, and I had to collect the history in minute amounts as it was doled out in the narrative. Had this been an author I was not familiar with, or less favorably inclined toward, I would not have bothered.

There is a similar gap, although not as severe, in the narrative between chapters 7 and 8. At the end of Chapter 7, Responsibility, now known by her true name of Azriyqam, has just faced a death duel, and has been given significant instruction on  aspects of loyalty and unity. In the very next page, with no transition given at all, we read that she is drowning, followed by a confusing narrative about her instruction in the supernatural arts. I found this to be utterly disorienting; it took me entirely out of the story.

The second significant glitch I encountered was the  inconsistent progress that the protagonist makes during the story. Admittedly, there is much she has to adjust to;  initially, she is a much abused and neglected prisoner, always fearing for her life. Very early in the book, however, she discovers that she is the daughter of the ruler of a powerful kingdom.  The whole of the book deals with her spiritual journey to accept and emerge into her new role.

However, she is both poorly instructed, in some cases, and then often resistant to what instruction she is given. For example, we learn that she is unable to to pronounce certain phrases of power correctly, as long as she clings to her learned accent. However, if she intentionally mimics the speech of one of her antagonistic characters, her pronunciation is perfect. Despite learning this trick, however, she refuses to implement it.
She seems to shift back and forth, from acceptance to rejection, at random.
Her stubborn refusal to accept the need to adapt is mirrored perfectly in another character, who is forced by circumstances to become an ally. In her case, though, she has her intransigent behavior stuffed into her face:

“Are you going to keep underestimating us, Captain? Or will you consider that you may have something to learn?” (Huggins, G. Scott. Responsibility of the Crown . New Mythology Press. Kindle Edition.)

And, who is the wiser person who forces this realization? None other than Responsibility/Azriyqam. So, if she preach it, why can’t she live it out?

I really liked the culture clashes possible with the three distinct civilizations. The great world-spanning oceans might be exactly what permits each grouping to go its’ own way, with civilizations based on water at a technological disadvantage to those with access to mineral resources on land. The story of the Lost Princess/Prince is a good one, and can be enjoyed in many permutations. I also appreciate the various aspects of sufficiently advanced technology being indistinguishable from magic being used in the story; at one point, radio is explained by one character to another as sorcery, because the tech is too confusing.

Although much of the main storyline is resolved, there are many threads that can be followed in the future. I hope that in those theoretical future volumes, the author will provide the reader with enough history to prevent the disorientation that I experienced. I certainly remain a fan of his work, and hope to see more on the way.

Peace be on your household