The front cover, and an Amazon Associates link: 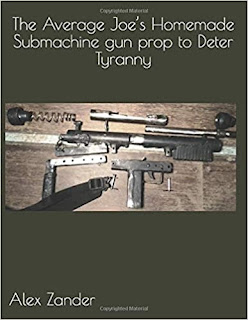 The Front Cover!
I should know better than to put certain books in my reviewing queue. They clog things up.
And yet, I do it.
This is one of those books. I bought it back at the beginning of December, and read through it in less than a day. So, why has it taken me so long to write a review?
In the first place, I had to decide exactly how I was going to treat the content of the book: go surface, or go deep. I guess I’ll find out now what my decision was.
In the second place, since this is a “how-to-build-it” book, I had to decide whether I was going to actually build the item. That is NOT a trivial choice! In the end, I decided NOT to attempt the build, because I don’t have some of the equipment called for.
Very clearly, this is a book on which very small resources were devoted to design choices. The front cover is actually nicely restrained, in my opinion. The title and author’s name are legible white type on a black background; I think I would have preferred larger, or at least thicker, type. For some reason, the words “gun prop” are not capitalized in the title.
The other feature on the front cover is a nice, clear sepia-toned picture of the components of the submachine gun prop.
In my opinion, the back cover is: a mess. A wall of reddish text is placed on a tan/khaki/light brown background, and the combination makes the letters blur. I don’t know how that makes sense. Shouldn’t the covers be an advertisement, a tease? Well, the back cover is more in the line of a treatise. I would scrap the red-text-on-brown approach, and delete 90% of the text.
Other observations on the structure of the book:
I am FAITHFULLY going to adhere to the author’s practice of referring to the item as a gun prop, and not a firearm. A person who follows the instructions given, to the letter, will not have committed a felony, but will have an amusing non-functional display item.
Were this a functional device, it would be prohibited by a number of laws and regulations. For example, since 1986, it has been illegal to manufacture a fully-automatic firearm for use by civilians. In addition, the solvent trap, if placed on a functional firearm, would significantly reduce the sound of firing. These devices, for some bizarre reason, were proscribed in 1934 unless the owner received a tax stamp.
Fortunately, in “Chapter 4: Bolt/Bolt carrier,” the author EXPLICITLY describes how to avoid accidentally turning this inert device into a functional fully-automatic machine gun. That’s a critical issue, because a felony is the alternative.
So: what is the value of this book?
Clearly, the value cannot be found as a guide to making a functional machine gun. Not only would that be a felony, the plans for this simple design are available for download from any number of websites. This is, after all, the most common design that turns up in police raids in Australia, which has one of the most restrictive firearms policies around.
On the other hand, the relative cheapness of the materials used to make the gun prop suggests to me that it might make a really nice project for learning techniques. At the end of the attempt, even a bungled assembly would still make an eye-catching display; after all, the item is inert, so what difference does it make if the movable parts don’t move?
It also makes for a nice addition to the library for people who like bizarre things.
Final note: the title page says that this is Title #1 in the series of “The Average Joe’s Tyranny Deterrents.” A search for subsequent titles found nothing pertinent.
Peace be on your household.
Posted by Habakkuk21 at 10:54 AM 2 comments: