Greetings, internet friends and neighbors, and a great good morning to you! And to those family members who have made their way here, I hope you are all as well as you can be!

It's RED Friday, and also Friday the 13th, and late yesterday, Georgia's governor suggested schools might want to close for two weeks, as a precaution to keep from spreading COVID-19.
So, today my kids went off to school to get whatever they needed, and for at least the next two weeks, they are at home. They THINK it's just going to be video games for two weeks.
That's not what my gift-from-God, happily-ever-after trophy wife Vanessa, the elegant, foxy, praying black grandmother of Woodstock, GA, thinks, though.
She's usually right in such times.

Now, I want you all to pay special attention to what I am about to say next:


If you are sick, stay home. And keep your sick kids at home.

I'm now parenting-while-retired, but for 20+ years, I parented-while-working. I well know the dilemma you find yourself in when your kid is sick. You might be working in a job, where not showing up to work means you don't get paid; it might even mean you are fired.

I couldn't begin to count all the times I've had to make last-minute phone calls to line up someone who could sit for a sniffle-child, dropped off at 5:30 AM, so I could be at work in time for the day shift. And unfortunately, there were quite a few times when there wasn't anyone I could call, and I had to make that unpleasant phone call to my boss.

It's a great temptation to just go ahead, and send them to school or daycare, because they aren't THAT sick.

I have BEEN there, and had to make the tough decision, and I DO understand. And I still say:

Even healthy people can get sick, when you send your sick child to school.

I have a great good friend who was the General Manager at a big water park when several kids got sick from being in the kiddie pool. Turns out someone had sent their sick kid to day care, because they were going to the water park, and they didn't want to miss work, and they didn't want their child to miss the water park. As a result, 26 kids got sick from E-coli; 7 required hospitalization, and one died. Another had a stroke - at 4 years of age - while hospitalized, and has had to relearn how to walk.

And for people who already have health issues? That little germ you spread, or your child spreads, can trigger an illness with dire consequences.

Let me introduce you to a wonderfully gifted lady, who loved God, her husband, her children, her grandchildren, and was looking forward to loving them even more: 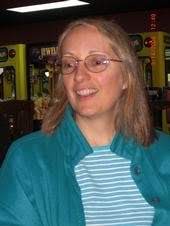 She worked at a childcare center, in the nursery, by choice. She LOVED taking care of children! She was a cancer patient, and taking treatments; maybe, it's because she had gotten close to crossing over, that every chance she had to be kind, to produce a laugh, was a precious opportunity.

One day, they were having a Crazy Hair Day at the daycare, and this beautiful woman put her hair up in these MOST ridiculous, goofy looking pigtail-braid things, just so she could give the gift of making the kids a little bit happier. Because that was her mission: to give happiness gifts. (Well, that was PART of her mission.)
And that was the day (or maybe it was a day or two or three before), that a child who was just a little bit sick, accidentally gave Leona a gift; a bad gift. A germ gift.
I'm choosing to imagine it happened while Leona was hugging them. Because she was all about loving kids.

The next day, dear, happy, loving Leona had to leave her kids;  she went home sick.
She went straight to bed, and stayed there, until she was transferred to a medical facility.

Here's how her husband Doug described the next stage for Leona:

After recovering from a month and a half stay in either hospital or convalescent center, she was finally able to go home. But the job was no longer there, and the progress of the cancer accelerated, spreading through her lymph system, until finally she could fight it no more. She celebrated her 62nd birthday with family and friends around her bedside. And ten days after her birthday, she lost her fight.

Hear this, clearly:
Perhaps they would have had to suffer some job consequences. We just don't know. It really doesn't matter, does it?  Because in this case, the consequences of sending their sick little one to school were to prove lethal. They didn't even think about that, because most of the time, the worst doesn't happen.

And you don't have the right to do that.


So, don't.
Sure, you will have to pay some other price, in some other currency.
Any thinking parent will tell you, none of us had any idea of just how many ways we would wind up paying over the years.
This is just one of many prices.
Pay it.

So someone else  doesn't have to.