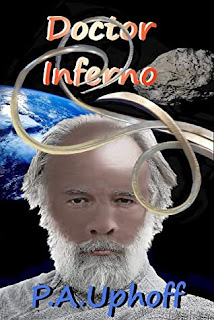 I would have gotten this book, just because it’s written by one of the Masters of Prolificity, Pam Uphoff. Once you start reading her work, you will never finish (at least, not as long as you are trying to do other things with your life); but what a great way to go!

However, there was another reason for picking this volume, and that is that the person on the front cover looks A LOT like me, with some few differences; my hairline hasn’t receded that far back, yet. I was delighted to find that this represents a super-villain, and more so to discover that he’s about three hundred years older than I. So, I have a while to work on the hairline.

Alas, William N. Furnace (Dr. Inferno) and I appear to have at least one other thing in common: we forget things. He forgets what senior activities he has signed up for; I forget to review books I’ve gotten. This particular item was picked up on March 11; today is May 29.

He’s long since retired, and been forgotten by the world. That’s what permits him to live undisturbed in a senior facility, close enough to the bright lights of Las Vegas to permit monthly field trips. Undisturbed, despite the fact that one of his fellow residents is a former agent who had pursued him during his days of active mischief. Time has healed those wounds, however, and now they have a bond formed by the fact that they are both inactive, due to being more than three centuries old. They expect that even their advanced, and manipulated, DNA will give out eventually, though, as it has already shown signs of doing.

But, don’t touch that dial! A comeback awaits!

A combination of irascibility, luck, and general refusal to accept fate without fighting back puts our aged ex-villain back into action. Backed with resources accumulated by his long-active AI, Dr Inferno emerges, just in time to threaten/save the world, one more time.

Uphoff’s ability to make you feel the characters she produces is enough to cause one to be just a bit suspicious. Does she actually KNOW a near-senescent super-villain? Is that why she is able to make this character come to life so thoroughly?

Alas. I fear that it’s merely a case of her being able to write characters that we want to be, ourselves. Is there anyone who WOULDN’T like to rise above the wheelchair and adult diapers, and shake the world to its’ foundations again?

Maybe it’s just because the cover image and I resemble each other, but I think not. I would have liked to read this when I was 12 years old. I was, of course, a confirmed FAN by that time. And, while the technology referenced in the story would have been far advanced for 1965, the true nature of the adventure lies in the determination of the characters to Get The Job Done. And, as long as she is writing about that, not private relationships with super-villains are necessary.

I’m not ruling them out, though. She does, after all, live in Texas.