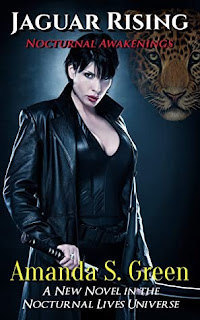 The first book in this series, Nocturnal Origins, was one of the first books I reviewed when I started out in 2014. I blush now, when I admit that I wrote the review with my tongue so firmly placed in my cheek that my ear was slightly bruised. At the time,  I was a bit put off by message-fiction, in which all of the value seemed to be related to whether some social or political agenda was promoted, and good story-telling was ignored.  As an act of rebellion, I decided to write the review as if I were one of the worst of the message-fiction lovers, and had missed the point, utterly. The title of my review on Amazon was “A blisteringly erotic LGBT allegory.”

If my count is correct, this is the tenth installment in the story of Mackenzie Santos, who started her story as a cop, only to have complications added over the past seven years (or so) of her life in literature. Thus we have a significant problem for the author who writes a series:

How do you address the disorientation of a reader who enters the world, somewhere other than at the beginning? And, how do you do that, without boring the reader who has been following the story all along?

Without detailing the alternatives, other than saying that failure to provide SOME mechanism to bring the initiate up to speed is a BAD choice, I think the method Amanda Green chose in this volume is magnificent. She incorporated most, if not all, of the necessary background into the narrative. Thus, as we see Captain Santos preparing for a new job, we are also given the history of the job she is leaving behind. Her relationships with friends and family are revealed, in the course of the discussion of who will attend which event, and which child needs a snack, and who will provide it.

A straight data dump would likely have been indigestible to the novice, and a waste of space for the committed fan of the story. Furthermore, the transition from background to current events would have been clunky; with this treatment, I found the transition to be perfectly seamless.

I’m going to have to give part of my applause to the craftsmanship of the writing, and another part to what HAS to be some great planning of the story arc. Knowing what is going to happen in the life of the character isn’t always possible, I’ve learned, but it surely does make for good beginnings and endings to stories.

There is no guarantee that the principal characters in these stories are going to emerge unscathed, or even alive. After all, Santos herself dies in the first installment. However, WHATEVER befalls them is integral to the story; they aren’t killed off just for the sheer bloody-mindedness of it. So, be prepared to have some shocks, as you start your read. Green does NOT hamstring the villains, and in some cases, they accomplish their evil plans.

And those evil plans initiate RAPIDLY. Before the close of the second chapter, the action commences. I really wouldn’t call the book “action-packed,” as it isn’t one exploding spaceship/car chase after another. However, it IS story-packed, with no wasted narrative, and if there are any rabbit trails, I didn’t notice them.

The complications added to Santos’ life over the years are present in the storyline; we see her in her role as a cop, as a Marine officer, as a member of a family with close ties, and as a person with responsibilities to a greater organization. All of these are strongly positive in her life, but they also take a toll on her, and there are times when her fatigue is palpable; I found myself wanting to take a nap for her.

I find myself wanting to tell the story, but I’m not going to do that, because spoilers. However, I WILL say this: there is no time in which Santos shape-shifts into a duck. I’m not saying whether that is a good thing or a bad thing; it WOULD bring an element of the absurd into the story, which would be out of place, but who am I to judge? At any rate rate, it doesn’t happen, and we can thank the good sense of the author for that.