And, for those of you running an ad blocker, here's the cover image: 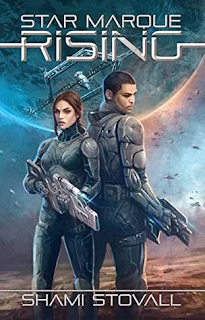 And here's the link!

Much condensed versions of this review may be found at Goodreads and on Amazon (I'll add the link in when it posts).

Greetings to all my internet friends and neighbors, and to any of my family checking in, it’s going to be a lovely day!

Shami Stovall is a (relatively) new author, and her work deserves much better treatment at my hands than it has gotten. She sent me a copy of this book, pre-pub, for my review, and it just didn’t happen. It got placed in the queue, but then it got lost, and then, and then, and then. And, as a result, I missed out on a WONDERFUL read.

Let us first consider what I regard as the core of the book: the Prisoner’s Dilemma.

In the classic formulation, two prisoners, A and B,  are arrested for a crime committed jointly. Separately, each is offered a chance to confess.
If they both remain silent, then they will both be convicted of a lesser crime, with a one year sentence.
If they both confess, they will both be convicted, with shared responsibility, of the greater crime, and each be given a two year sentence.
If A remains silent, and B confesses, then B goes free, and A takes the whole rap, getting a three year sentence.

Since the original formulation of the dilemma, there have been many refinements and modifications to fit all sorts of situations, including investment strategy, sports, addiction, and international relations. In some cases, it’s formulated as a zero-sum game (whatever one wins, another has to lose), while others are less-than-zero sum (everybody loses, but a least-loss scenario is possible). It really has some fascinating applications!

I encountered it twice in an academic setting. The first time was in a study of group dynamics, for a counseling class; the second was in some dip-stick business class that I never, ever should have been taking. However, I DID gain insight into the human condition in both cases; I particularly recall seeing a brittle, manipulative classmate attempt to use smiles and hugs to control the revulsion reaction of another colleague. Making social dynamics explicit: wow, what a feeling!

Now, in “Star Marque Rising,”  Stovall posits the Prisoner’s Dilemma as a drinking game among the characters, but ALSO (brilliantly, in my opinion) constructs the story to make it obvious that the same dynamics are driving the actions of the main players.

No, I did not call the author. It was Stupid AM in the morning! Besides that, I don’t have her phone number. Besides that, my gift-from-God, happily-ever-after trophy wife Vanessa, the elegant, foxy, praying black grandmother of Woodstock, GA, was asleep in the bed next to me, and she would have been highly disturbed and offended to be woken up by hearing me squee on the telephone to an Unknown Woman.

So, I emailed her instead. Much better choice.

Now, returning from Cloud-Cuckoo Land, let me give you some nice summary statements about the book:
It’s a space opera. It starts on a filthy, corrupt, violent and vile space station, moves to a freighter (the Star Marque), lands on a planet, and goes other places. Lots of sentient beings die, some with explicit gore, others silently, and many of them don’t really deserve it.
Clevon Demarco is the protagonist. He received significant bionic upgrades as a child, but has been making his way as a loner on the aforementioned vile space station. He has no money, and no friends, and no future.
Then, he gets rescued by the cops. And, as part of the price of his rescue, he joins them.
The boss is (seemingly-super-woman) Endellion Voight, who apparently makes it her practice to cruise the universe, rescuing sad-sacks like Demarco, and incorporating them into her team.
And, way, way off in the Far Country (I speak figuratively) live the Special People. They own everything worth owning, they run everything worth running, and if you aren’t a Special People, you are, at best, a tool of the Special People.
And if you can’t figure out that this sets up a GREAT framework for a story, you haven’t read many great stories.

It’s a smashing good read, and the beginning of a series, and I hope that others are much nicer to Shami Stovall than I have been.