A great good morning to all my friends and neighbors in Internet Land! And to family members who have dropped by, I surely do miss seeing your faces. Well, some of your faces. 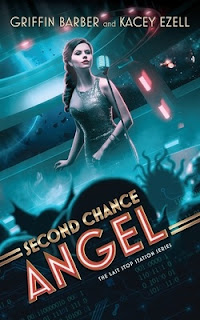 Since I read "Gilded Cage" in the "Fistful of Credits" anthology back in 2017, the writing of Kacy Ezell has astounded me; click here to read my review of that story. I don't recall ever devoting an entire blog post to a single story in a collection, but this one was well worth the exception. She's not my ONLY favorite author, but she is definitely at the top of the list.

All of my favorites write about why THIS exploding spaceship is significant. Sure, the suits of the Mechanized Infantry are fantastic in themselves, but it's Johnny Rico we care about it. Kipling tells us FIRST about the widow in England who weeps for her lost son, before we know about the samadh of a hundred heads.

Therefore, at least a PART of my reading/reviewing plan includes ANY of the new releases by authors who I have marked as good story-tellers. That doesn't mean ANYBODY gets an automatic pass; I've written at least one one-star review for an author at the very top of my list. I mention that because I've had a person who hate Heinlein accuse me of indiscriminately tossing out five-star reviews. (Since my reviews tend to run LONG, I also reject out the "tossing out" accusation...)

In line with my stated goal, from time to time, I get a pre-release review copy of a book, so I can post an early review on Amazon and elsewhere. Unfortunately, Life, The Universe and Everything has decided that I make a good storage location for all the disturbance not otherwise allocated, and this has interfered with my ability to read and review. I wish to point out that my gift-from-God, happily-ever-after trophy wife Vanessa, the elegant, foxy, praying black grandmother of Woodstock, GA and I have 10 adult children, 15 grandchildren, with one on the way, and one great-grandchild, with the second due this spring. Any person who loves a LOT of people is going to have multiple opportunities to Get Through Things.

Thus, this review emerges some six months after I was given access to a review copy. I regret the delay; it is not a function of anything but the influence of LTUE.

I see from other reviews that the noir aspects of the story have been acknowledged; personally, it was a lot more specific than that. However, I mis-remembered, and had the protagonist labeled as "Sam Spade." His last name IS Muck, after all, which is something you might use a spade to eliminate. However, reviewing the hard-boiled detectives disclosed that the big Unresolved-Sexual-Tension-duo was Mike Hammer and his secretary Velda.

Ralston Muck is the Big Lug, although he's not a former cop working as a private eye in a seamy office in LA; instead, he's a former MILITARY cop, working as a bouncer in a seamy bar in Last Stop Station.

I like science as much as anybody, I guess, but science alone does NOT make for a good story. Here, the necessary-but-not-sufficient science aspects include: humans were recruited by aliens to fight a galactic war; Artificial Intelligence is advanced enough that they run major environmental functions; relatively cheap interstellar transport and communications is real; lots of aliens exist, and interact; humans can receive AI modifications that enhance various capabilities. The rest of the story is the really good part (one exception).

At the time of these events, humans have gotten over the trauma of Earth's destruction. It's something they are aware of, but nobody is bent out of shape about it anymore. The identified Bad Guys, the Xlodich, have been wiped out, and life goes on. One of the places it's going on is Last Stop Station; think Sam Spade's Los Angeles.

The presumptive heroine of the story is Siren, a singer in the dive where Muck works. She's only with us at the very beginning of the book; it's her abrupt disappearance that triggers the main plot line. Muck gets involved because he was the last person to see her alive, having escorted her home after a fan attempted to get to her while she was on stage.

Here's the BIG event: Siren's implanted AI is somehow removed, and finds her way to Muck's shabby domicile, and inhabits his body! This implant, taking the designated term for such entities as a personal identifier (Angel) is determined to find out what happened to Siren, and get back inside her body again. For reasons explained in the story, she is a semi-welcome presence. Key passage, narrated by Angel:

"I remained silent awhile, fascinated by how thoroughly I had misread my temporary host. Muck was far more than I’d thought. I don’t know why I had thought he would be any less complex than Siren, but I had."

This is really the beginning of what I term 'the good part,' which involves assorted entities interacting with each other. Although science is involved, frequently, it is the interactions that matter, and Barber and Ezell have a lovely ability to imagine and describe the interactions so that they are believable and compelling. I'm not familiar with Barber's other work, but Ezell has astounded me on numerous occasions with her compact characterizations of vivid, sometimes horrifying, events.

I mentioned earlier that there was one exception to the good stuff being non-science. I found that exception in the way that interactions, extending as far as mortal combat, are described between machine intelligences. The authors string together words that I don't think were ever designed to represent struggle, and make make conversations between AIs a real event, and then escalate that, so that AI combat seems as bloody as Hammer's kick to the legs and .45 slug to the guts. (You thought the Mike Hammer references were over, didn't you?)

I'm tempted to suggest that some of the content might not be suitable for teens; then I remember that I was reading James Bond when I was 11. But, sure; if you are going to give this to your teen or pre-teen, make sure you are available to talk to them. I DO think there would be some GREAT conversations held about the relationship between Angel and Muck, concerning their reactions to initiating intimacy.  That bit HAS to be Ezell's; prove me wrong.