A Short Meditation: The Day Before Easter

Today is Saturday, April 20, 2019. You and I know that tomorrow is Easter Sunday. The disciples didn't know that. I wonder: was Saturday worse than Friday? If I were to recall certain horrific events in my life, I think maybe the day after was worse than the day itself. On the day of the trauma, there was shock and horror. But on the day after? It's the first day to live with the new reality of loss, and I have never known how to do that. Of course, I've never had a loss as shocking and horrible as being a disciple who had watched Jesus crucified. Not even close. Still, I think, maybe, the disciples being just as human as I am, that Saturday was worse than Friday. Not only were they reliving the events in their mind, over and over, but they had to be terrified that they might be the next one arrested. Tomorrow, I'll have a different perspective. But for right now, I think I'm just going to stay in Saturday, and try to fully comprehend. 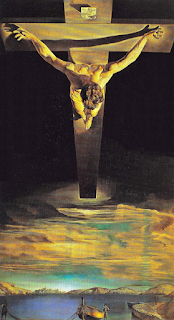 Dali's "Christ of St. John On The Cross"
"I will stand on my guardpost, and station myself on the rampart, and I will keep watch to see what He will say to me, and how I may reply when I am reproved."
Habakkuk 21, NASB
Peace be on your household.
Posted by Habakkuk21 at 9:19 PM 2 comments:

It's Happening Below the Surface, With Asterisks: Good Friday

Greetings and blessings, internet friends and neighbors, plus those precious relatives who are taking the time away from intense life-dealing in order to find some diversion.

Today is the day western Christianity observes Good Friday. (It's a week later in the Orthodox traditions.) Historically, it's been a time of reflection and meditation.

I think my meditation started with sunflowers. 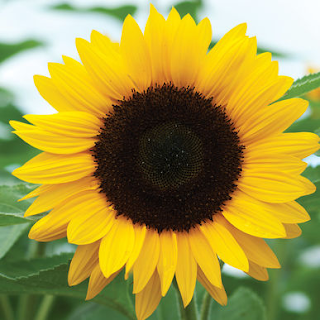 My gift-from-God, happily-ever-after trophy wife Vanessa, the elegant, foxy, praying black grandmother of Woodstock, GA, decided to do some yard planting in a small way this year. In addition to the tomato plants in big pots on the back porch, she put some other items out. One of those was sunflowers.

Coming home from church last Sunday, she remarked that her sunflowers didn't seem to be growing. I nodded my head, having fearlessly restrained myself from ANY involvement whatsoever* in her gardening frenzy, and did not wish to have that fact drawn to her attention.

*That's not PRECISELY true. Shortly after she had put the tomato plants out, Winter returned for a brief, but intense, visit, and we had a few nights of sub-freezing temperatures. On those nights, I moved the potted plants in to the kitchen at night, and put them back outside when it warmed up the next day. Here ended my contribution.

Yesterday Uncle Mylon and Good Dog Diesel came for a visit. He is my oldest friend with whom I am in frequent face-to-face contact;* we go back to 1977, in Riverdale, Clayton County, GA.


*I DO have an older friend, Billy. He and I go back to Cub Scout days in 1965 or so, then made later contact in 1969-ish, when we were significantly involved in each others' lives for the last years of high school and first year of college. However, he and his intensely lovely, precious, devout, funny wife Vicki live a long way from here. I did take the the whole Chattahoochee Patterson fam, plus a small Blackstone Patterson fam, to visit his farm ("Best For Last") a couple of years ago, but since then, Facebook is how we stay in touch.

Uncle Mylon, who is the most gifted artist/advertising person in the world, also has a landscaping business. Therein lies a tale which NEEDS to be told; and, in fact, I HAVE told it, face to face, on numerous occasions, but I'll not reference it further at this point except to say that if a person combining the best features of David Ogilvy and Pablo Picasso offers to trim your hedges, just shut up, and watch your hedges become a thing of beauty. Oh, heck; here's ONE of Uncle Mylon's bits of art; it's one of his images of me. 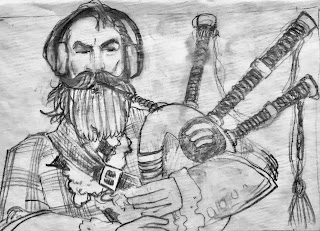 Yes, I AM a Scot by blood.
I do not own bagpipes

Anyway, as I was saying, Uncle Mylon and Good Dog Diesel  came by the house yesterday, and Uncle Mylon worked his magic on growing things. We were chilling a bit on the front porch afterward, and Uncle Mylon said "Your sunflowers are looking good! Before long, you are going to need to stake them." And that was Thursday, just four days after there was no visible evidence of them showing up.

And I am thus encouraged.

I have children, you see. And grandchildren. ALMOST every bit of evidence that I have,  for those I am privileged to interact with on a regular basis, is that they are fully aware that all of the screaming, shouting, outrage, fear, and hostility is about things that are of transitory importance (if that). But sometimes, I allow myself to grow, a bit, discouraged when one tells me of a choice that I KNOW is going to produce unpleasantness.

It's the same discouragement I feel on those RARE occasions when I permit myself to glance at a newspaper headline, or have a report of some stupidity come my way. Stupidity, for example, along the lines of the person who scrawled threats on the wall of the boys bathroom, in the high school located next to my house.

I'm not worried about the outcome of that particular 'threat.' I'm discouraged by the stupidity of the student who did it. Don't they know that the high school has security cameras, and while they DON'T  look into the bathrooms, they SURELY DO see who goes in and out the doors? Within the next day or so, some parents are going to be sitting down with the cops and the school administration and their kid, and having negative amounts of fun.

Perhaps today. On Good Friday. And, perhaps, for that family, memories this day are going to be forever linked with a stupid act. But, I hope, with results eventually similar to that on the first Good Friday.

Peace be on your household.
Posted by Habakkuk21 at 12:23 PM No comments:

An Example Of Compelling Writing: A Diamond the Size of Your Fist

Greetings to all of my internet friends and neighbors, and a great good morning to my family everywhere, as you put on the last touches of Preparation Thursday, before walking out the door to school or work.

Papa Pat has SO many irons on the fire that he can't get any ironing done. I was finally able to start reading, a week or so ago, and today I review.


NOTE: If I do NOT get at least one review published by midnight tonight, then I will change my avatar in my most-frequented Facebook hangout from Redneck Biker to Redneck Moped Guy.

And I have three other projects pending: further exploration of what my experience has been with self-administration of CBD oil via an inhaler; reloading some ammo, including the lovely but challenging 7.62x25 Tokarev round; taking my newly acquired Chinese SKS to the range to see if it really IS as accurate as the single bench-rested target from last Saturday promised. 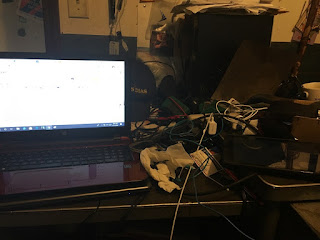 "And if you think THAT is bad,
you ought to see inside HERE!" (points to head)

Rather than wait until one of those projects is complete, and then blogging on that, I decided to blog about some beautiful prose I read this morning.

The selection is taken from a yet unpublished book titled "Possum Creek Massacre" by Cedar Sanderson (and an excerpt from the book is found at the link), about whom you have heard me rave before. ALL of her work is first class. but sometimes, as you sift through the gold dust in her work, you encounter a diamond the size of your fist. Check this out:

"The idea had been to keep warm in the winter and cooler in the summer, but it didn’t work so well in the summer. It was cooler to sleep on the porch, even if the mosquitoes were a torment. She’d been sleeping there since May, and had planned to continue until September, but she didn’t have that long." ("Possum Creek Massacre," unpublished, by Cedar Sanderson.)


You don't HAVE to know the details of 'the idea' to understand what's going on, particularly if you live in an area of the country when one (or more) seasons are not particularly friendly to man.

The first two sentences, and the first two thirds of the last sentence, give you a BEAUTIFUL set-up.
It's a nice, homey description, and although the unidentified protagonist of the chapter seems to have perhaps a little bit of the hoarder in her, she is quite sympathetic. And then...

The knife slips in so skillfully, it doesn't even hurt, at first.  And the following paragraphs play off that beautifully, slowly. Each has an intro that tells you, up front, that the Bad Thing is coming, and then resumes, depicting the surroundings as if they were slowly unraveling.  And there is a bit of dread mixed in.

Yup. That's good writing. It's not out yet, but look for "Possum Creek Massacre."