A Lovely Trip to the Range with Moose

Greetings, to all my friends, neighbors, and relations out there in Internet Land!

Background. I have previously written of range trips with my youngest and largest son, the Moose, so named because his real name is Mickey, and he was 10 lbs. 9 oz. at birth, and we knew we had no Mickey Mouse, but a Mickey Moose. He now TOWERS over me at around 6'5" and it's a strange sensation for me, at 6+ feet, to hug someone and have my head only come up to their shoulder.

He diligently and gently cares for his Papa, as do all my children and grandchildren, and all of that is a great comfort to me and to my gift-from-God, happily-ever-after trophy wife Vanessa, the elegant, foxy, praying black grandmother of Woodstock, GA.

Purpose of the trip. This range trip actually had a distinct purpose, other than the sheer joy of punching small holes in pieces of paper. I had acquired two firearms I'd not yet fired, and had another non-functional firearm returned to me from the gunsmith I needed to do a function check on.

Firearm #1: A Polish PPS-43C, the civilian version of the best submachine gun of WWII, firing the bodaciously delightful fireball 7.62x25 Tokarev cartridge. The folding shoulder stock has to be welded to the receiver in the closed position to allow import to the US as a pistol, since the barrel is only 10 inches long.


Firearm #2: A Springfield Armory XD-40, a sub-compact pistol in .40 S&W. I purchased this from my late brother-in-law's estate a few months back;


Here's a helpful hint for all of you out there who are over 18 and/or have people you care for: make a will.


I've had no experience with either Springfield Armory nor the .40 S&W caliber, although I was VERY familiar with published reports on both. If I use this, it will be as a concealed carry in an ankle holster. I've worn it that way, just to get a feel for it, and it's invisible and comfortable.

Firearm #3: a Smith & Wesson 5906, a stainless steel 9 mm I bought myself as a reward for winning a Student Advocacy Award in 2005. Liked the gun, but hated the trigger. Both of my bio-sons had sequentially made this their primary carry piece, until Moose admitted that some unknown defect had made this a single shot pistol. It languished on the shelf for several years; I could not, in good conscience, sell it, even disclosing the problem. However, Deercreek Gun Shop in Marietta came highly recommended, and I decided to give them a chance.

The other Big Boy toys: I have a .45 ACP High Point carbine, designated as my back-up home defense weapon. It hadn't been fired for at least a year, maybe two or three. I also wanted to run a familiarization exercise with my daily carry piece, a 9 mm Browning High Power  bought surplus from the Israeli Defense force; my Zastava M57 pistol in 7.62x25, and finally, my precious, my darling, that flower of the genius of John Moses Browning, my Rock Island Armory 1911. Mickey chipped in with his sho-nuff AMT Hardballer 1911, a lovely, rare smooth-functioning beast of a pistol that I stumbled upon at a pawnshop a few years back, and bought immediately. (For the uninitiated, unless otherwise designated, a 1911 is .45 ACP.)

Bonus event! And while we were there, shooting and chatting with neighbors, we were given the rare privilege of examining up close a pre-WWI Winchester 1894 in .30 WCF (later known as the .30-30), and of FIRING a 1942 Luger (9 mm), which I have never held, much less fired.

Pictures, or it didn't happen, right? I've got some videos on my Facebook page, but if blogger supports inserting video clips, I can't find the documentation. 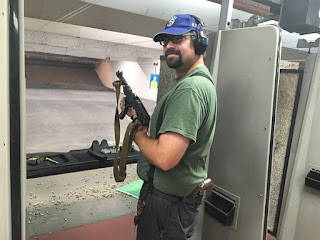 Moose with the PPS-43C.
That's his AMT Hardballer on his left hip. 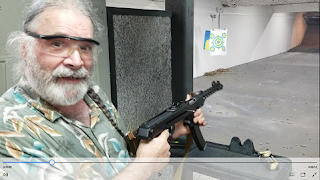 Me, first shots with the PPS-43C 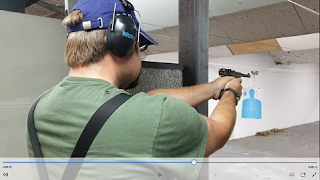 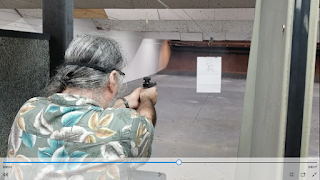 Me with the Luger

Results.
The PPS-43C functioned flawlessly, except when I tried rapid fire. As it had never been fired before, not a big deal.
The Springfield XD40 will do what it is supposed to do: hide away, and then knock people down. It's one of those guns that will make me decide 'do I really want to shoot this guy, or just give him my car?' I might just hand him the keys, and ask him if he needs money for gas.  That's what happens with the combination of tiny guns, big hands, and snappy calibers.
The S &W 5906 was better than it had EVER been. It ran so well, so sweetly, we shot up EVERY BIT of the 9 mm we brought with us, and we bring LOTS  of ammo when we go to the range. My only REAL dislike of the pistol before was the incredibly long take-up in single action mode, with a mushy break, and a gritty re-set. No idea of what the guys at Deerfield did, but it is a totally different firearm now.

As I mentioned in my April 17 post, Moose is now out shooting me with EVERY firearm. It doesn't embarrass him any more; I scolded him for not using more of the target we had paid for. I used the whole target, because I value diversity, you see, but Moose seems constrained by 9-10-X rings. Makes me proud, y'all, because I taught the boy how to shoot.

And I'm still able to empty the magazine of my High Power into a 3" head shot Shoot 'N' See target at 30 feet, rapid fire.

And I got a senior citizen discount: half-price!