A Father-Daughter Moment With Alicia Ann

Howdy, to all my friends, neighbors, and family out there in Internet Land!

Shortly after school started at the beginning of August, I re-formalized (again) the chore duties for 13 year old Kenneth and 12 year old Alicia. In addition to the individual stuff (cleaning their rooms, etc) they each have ONE biggie whole-house job: Kenneth is in charge of trash & yard, and Alicia is in charge of dishes. 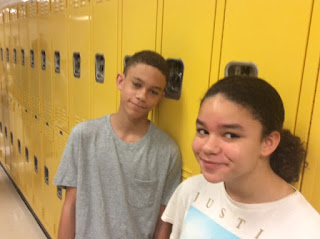 Kenneth on the left, Alicia on the right.
School walk-through, 7/31/18 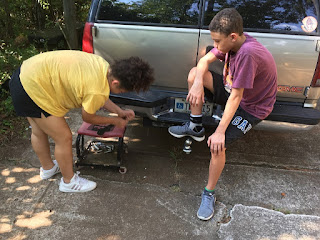 I gave both of them a specific deadline by which the chore was to be accomplished. And I offered to negotiate with them for compensation. Kenneth opted to do the trash for free, and to spot-negotiate for specific yard-cleaning tasks.

Alicia Ann, however, was in a snit, and didn't want to get paid, because she preferred to regard herself as horribly put upon: Cinderella, child slave labor, all that stuff. It's impossible to maintain that attitude when cash is coming your way.

I told her I was okay with that. I've told the kids before that when I give them an instruction, I do not require them to like it; I only require them to do it. And I also require respect, which is a requirement on EVERY person in the house, not just them.

So, Alicia came home every day from school, and did the dishes. At first, she found it necessary to bang the pots a little harder so that I could see that she was awfully mistreated (my man-cave is right next to the kitchen), but that was okay; I didn't require her to like it, only to do it.

After a few weeks, I heard her fussing and crying at the sink one day. Not being an absolute ogre, I checked it out, and discovered that she was frustrated at having to clean out some crusted-on goop someone had left on their plate, instead of scraping it into the trash first. From the looks of it, it had also been sitting in someone's room for AT LEAST 24 hours, too. In my opinion, that was an abuse of Alicia's responsibility for the dishes. So, I cleaned that dish myself, then drafted a 'Kitchen Courtesy' letter that addressed proper protocol, and posted it on the sink. Problem was fixed, immediately. Alicia went back to doing the dishes every day when she came home.

Until Tuesday of last week. Somewhat sheepishly, she asked me if she could get paid for washing the dishes, and IMMEDIATELY, I said YES!!!

And then, we negotiated about price. She asked for $5; I told her I had been thinking about $2. She countered with $3. I gave it some consideration, and then told her that if she did the dishes EVERY SINGLE DAY when she came home from school, without being reminded, I would pay her $3; but, if I had to remind her, even ONCE, then her pay for that week was $2. She agreed.

And then, she was WONDERFULLY co-operative. Every day, without fail. And, on Friday AFTER she had done the dishes, she approached me for her pay. I cheerfully paid over $3 (sort-of, some additional story, but not now), and then I told her:


"Alicia, the most important part of my life is my relationship with God. The second is my role as a husband, and the third is my role as a father. The best moments in a father's life are the times he sees his children make a mature and responsible decision, because it shows they are really progressing to becoming responsible adults. You have given me one of those moments. On your own, you decided to ask for pay, because you had gotten over your snit; you did an EXCELLENT job of negotiation; and then, you followed through. Thank you, for giving me such a wonderful Father moment."

And she shyly smiled, and said "you're welcome," and then she headed off to do whatever she wanted to do.

And she was happy, and I was happy, and my gift-from-God, happily-ever-after trophy wife Vanessa, the elegant, foxy, praying black grandmother of Woodstock, GA, was happy when I told her about it.

And, I hope it makes you a little bit happy, too.