In addition to reading and reviewing; being husband, father, and grandfather to a proliferating number of individuals (I wonder if we qualify as an invasive species?); and riding and providing an old-age rest home for motorcycles; I also enjoy owning and operating a number of firearms.

Let me explain that a bit: I'm not a gun nut, if such a thing really exists outside Hollywood. I AM a firm supporter of the Bill of Rights, although I really don't give much attention to the Third Amendment. The Second Amendment, however, gives me CONSTITUTIONAL and LEGAL justification to do what I want to do anyway, which is to own and operate firearms. In my case, I tend not to think of it in terms of the Second Amendment when I purchase a firearm, as much as I think how grateful I am to be married to my gift-from-God, happily-ever-after trophy wife Vanessa, the elegant, foxy, praying black grandmother of Woodstock, GA, who overcame a lifetime of distaste for guns because of her love for me.

Here's the thing, though: the pleasure of owning and operating firearms is both constricted by circumstances and expense. Unless I am actually down at the range shooting, my enjoyment of firearms is restricted to carrying one, and the comfort of my concealed carry holster (I carry a Browning Hi-Power, using the n82 tactical full size) means I don't really notice it. Therefore, I'm not walking around full of delight at being a gun owner, right? I'm just...a guy, see?

But when I DO go to the range, it used to get expensive, really fast. Like most people with good sense, I started with a .22; first, a plinker, then an economy target pistol . That wasn't very expensive at all; at the time, .22LR was everywhere and cheap. However, I soon desired to move up to something more beefy, and I went with the poor man's pistol in .45 ACP.

I LOVED that big clunky gun. It ate everything I fed it, and it hit everything I pointed it at. However, even though I'd gotten the pistol itself for amazing low money (I think it was $139 in 2002), the cost of operating it was adding up. At the time, a box of 50 rounds of range ammo cost me around $20, and since I was a novice, I had to run through a LOT of ammo to gain proficiency. Supporting a family of five on a school counselor's salary meant that those $20 bills were rather precious.

So, I started reloading.

My local gun store (now sadly defunct) was running a special on Lee equipment at the time, and for the not inconsiderable sum of $199 (I think), they got me set up with what I would need to reload for .45 ACP. After that, my only cost was for bullets, powder, and primers, and when I started casting my own lead bullets from wheelweights, I discovered it cost me less than three cents per round (no amortization of equipment, and figuring my labor at $0).

During the Bad Years, I had to give it up. My health and the treatment made me unable to cope with the intricacies, and I had no energy, yada, yada, yada. In fact, it's really only been in this past calendar year that I've gotten organized about getting into production. I DID try, a couple of years ago when it looked like we were going to get into Cowboy Action Shooting as a family activity, but that didn't pan out. This January, however, I acquired a Zastava M57 pistol, followed a couple of months later by the PPS-43C submachine gun, and both of those shoot the hard-to-find and somewhat expensive 7.62x25 Tokarev round.

NOTE: The PPS-43C shoots in semi-auto mode only, and the folding shoulder stock is permanently welded into the folded position, and so it is legally imported as a pistol. The modifications were necessary to prevent it from being classified as a short-barreled rife, which requires a $200 tax stamp to make legal.

The NEXT thing that happened was that I discovered how to make key rings and zipper pulls out of inert ammo, and make them look GOOD! So I asked my daughter if she would consider selling them on her internet store, and we are in process of setting that up now.

But, I needed a LITTLE bit of help with some reloading technique, what with being rusty, so I joined a couple of Facebook groups. And I discovered something:


Facebook has a hissy fit if they think you are engaged in evil bad unapproved nasty sales of wicked, wicked boom-booms!

Now, I absolutely get that they don't want to be complicit in facilitating the illegal transfer of firearms across state lines. There are procedures for doing that, and they should be followed. You have to have the firearm SENT from a Federal Firearm License Holder, TO a Federal Firearm License holder, and you have to be able to show to the receiving FFL that you are, in fact, legally able to purchase and possess that particular firearm in your locality. GOT THAT. IT'S THE LAW. IT'S ALSO COMMON PROCEDURE!!!

But Facebook took it one or two or three steps further. They banned ALL sales of firearm-RELATED items from pages devoted to reloading and discussing firearms, and backed that up by slamming shut the door on some pages that they found to be unworthy.

So, I decided to test the limits of Facebook's policies, a bit. I 'm gonna make the following post on a page I set up a couple of years ago; I was going to use it for reviews, but decided not to fool with it. It's still alive, though.

And I'm gonna see if I can get away with offering 9 mm brass as 'Metal Storage Containers.' If they kill that page, no great loss. I hope they don't come after my regular page, though. If they don't kill it, I'll push a little bit more. I will NOT do anything against the law; anything will ONLY be metal, no primers, no powder.

Anyway, what follows is the post on Reviewing with Papa Pat. It's live, as of 2:35 PM. Wonder how long it will last?

The storage devices are constructed of non-sparking brass, which actually gives them several different properties that are desirable for other applications. Although brass tarnishes rather easily, it is also easy to clean, and can be brought to a high luster, suitable especially for jewelry applications.

In the original configuration, for storage and transport of hazardous materials, a special fitting is placed on one end of the container, that permits rapid emptying under special circumstances. The fitting seals the bottom of the container, and prevents leakage as a secondary function.

They are primarily a single-use item, but under certain conditions may be collected and recycled. This requires special equipment and training, but for those who wish to pursue a sustainable, Earth-friendly lifestyle, it is an attractive option.

Those who wish, however, may purchase commercially available lids; in fact, when the need to transport hazardous material is pressing, the storage containers are available commercially with the fittings and lids pre-installed. However, even under these circumstances, the storage containers themselves remain the most durable aspect of the entire system.

The containers are usually designated by using either English or metric measurements of the diameter of the primary aperture of the container. The nomenclature of a few units also references the length of the container, in order to distinguish them from containers with the same lid diameter. This can be quite confusing for the novice, as there seems to be a near infinite variety of storage containers available, but most users will soon determine which aperture fits their own needs to safely transport hazardous materials. There are a few enthusiasts who go in the other direction, and enjoy collecting the widest possible variety of containers and contents, even to the point of specializing in obsolete forms.

As stated earlier, the non-sparking properties necessary for the safe transport of hazardous materials resulted in the selection of brass as the first choice for container construction. It is also a somewhat malleable metal, therefore resulting in a tight seal both in the bottom fitting and for the lid.

The storage containers I have for sale at this time will hold up to 0.862 cc of hazardous material, although some of that capacity should be reserved for the proper seating of the lid. The main aperture is 9.01 mm in diameter. Length of the container is 19.15 mm. 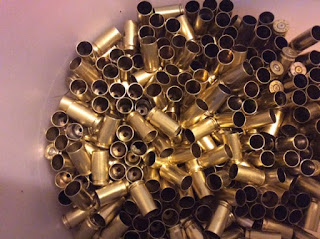 Peace be on your household.
Posted by Habakkuk21 at 2:36 PM