The Hi-Point 4595: A possible alternative to the 12 gauge for home defense 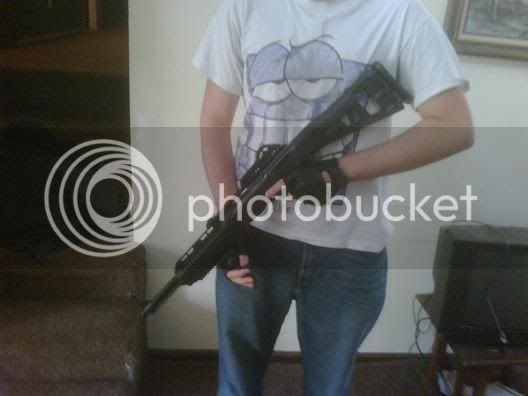 I haven't finished my current book, Lawyers on Mars, so here's my first gun review.

It's almost a universal consensus: the absolute best home defense is a shotgun. NOT, by the way, the double barrel type mentioned by a certain elected official, but a standard pump action, such as the Mossberg 500 held by my gift-from-God, happily-ever-after trophy wife Vanessa, the elegant foxy praying black grandmother of Woodstock, GA. A double barrel is much better than a rock, but it's only got two shells, and then a slow reload. A standard pump will give you more than twice as many shots, even if you elect to keep the chamber empty in order to manifest that intimidating racking sound to warn off the bad guys.

But a shotgun doesn't have to be your ONLY option. If you live in a house with more than one level, as we do, you might want to keep the shotgun on one level (the bedroom, for example) and then have your alternative ready on another (the man cave, perhaps). And, while there are a number of good alternatives, I suggest you consider a pistol caliber rifle in .45 ACP, in particular, the Hi Point 4595.

Hi-Points are the best firearm value around, and they are made in America. My first big caliber pistol purchase was a Hi-Point, the JHP in .45 ACP, and it's as rugged an item as you'll find anywhere. It took any ammo, never failed, and was, and still is, extremely accurate. As soon as I saw the price, my mouth got dry, because I could afford it and I wanted it bad! It's been more than 10 years since I bought it, so memory is off, but I know I paid less than $150 brand new. I bought both of my sons a Hi-Point, and they have them to this day.
However, it's not a lightweight pistol, at 35 ounces. That's not a problem for me, and in fact I like the way the pistol absorbs recoil, but it is heavy for Vanessa, who is small, with small hands.
However, the rifle version, at 7 pounds, is quite manageable for her, and if you are a big person and want to show off, you can fire it one-handed. I don't recommend that, but you could do it.
The standard peep sights are excellent, even for guys like me with aging eyes. The rifle shoots better than I do, giving me nice tight groups at the indoor range where I go for target practice. I haven't tried it at longer distances, but the rifle will do its' job every time.
The standard Hi-Point magazine holds 9 rounds, and I would absolutely recommend that for home defense you keep it with the chamber loaded, giving you 10 booms before having to reload. If it takes more than 10 rounds for you to clear your home, you are living in the wrong neighborhood, and possibly in the wrong country.
The 4595 lists for $330. I paid less than that for both of mine; the first I bought new when they came out with the .45 version, and the second cost me $225 second-hand. For Hi-Point, second hand is no problem, because they have a lifetime, no questions asked full warranty. At that price, you can afford to keep one in the truck, one in the office; you get the idea.
Posted by Habakkuk21 at 7:36 PM