No review, just bread, gold, the missing knife, and Texas

First, the reason you will get no review from me today: I am going to work on income taxes. Well, on year, at least. See, there are THREE years I haven't done, and it was making my gift-from-God, happily-ever-after trophy wife Vanessa, the elegant foxy praying black grandmother of Woodstock, GA a bit nervous. More than a bit, actually. So, two weeks ago, I asked my church home group to hold me accountable for filing at least on years' worth of taxes by the time of our next meeting, which is tomorrow. Yes, I did put it off the the last day. I have ADD, and that's how I roll. So, after I finish breakfast, which I am eating while I type, I'm going to devote the necessary time to do taxes. It will be a piece of cake. I don't like cake.
What about the bread? the gold? and the missing knife?
Well those are all sorta related to the breakfast. On Thursday, Vanessa and I took me to get a haircut. (begin RABBIT TRAIL) It was my third haircut in the past seven months; the one before that was three years ago. Getting haircuts seems to me to be an appalling waste of time, but Vanessa had sweetly hinted that it was time (and I mean that: she is amazingly sweet to me), and I don't grow my hair for me, I do it for her. I frankly don't give a rat's patoot about the way I look. "I don't mind it, because I'm behind it. It's the ones in front that get the jar." But Deb, of Hair By The Square in Marietta, gives a great haircut, and is a delightful person, and is the aunt through her sister Jenny of DJ & Kenzie Clark, the oldest and best friends of my oldest biological child, Sergeant Eli Jordan Patterson, A Btry, 1/214 FA, Georgia National Guard, who will finally, after cycling between military hospitals and Army red tape, be getting his discharge. It's been nearly two years since the rocket attack at Shindan Air Base smashed him into a concrete wall, gifting him with a traumatic brain injury and tearing his knee to bits. The US Army is fantastic in its' primary mission, which is blowing stuff up and killing people, but not so great (now) at taking care of its' people who are damaged and no longer combat effective. I thank God, literally, for the Wounded Warrior program, and the SHARE program at the Shepherd Center. Bernie Marcus, the Home Depot guy, gave them a million bucks seed money, and it's almost entirely a private project; the feds give them a paltry sum. (end RABBIT TRAIL)
After the cut, we had lunch at the Marietta Fish Market, $6.95 each for fish, shrimp, scallops, potato, AND THIS MAGNIFICENT HOMEMADE BREAD!!!!!!!!!!! We slammed the bread down while it was still hot from the oven, and frankly, if they had just brought me more bread, I would have been content. So when the sweet lady in business clothes stopped by the table to take the empty bread basket, I told her of our fond affection for the bread, and we chatted a bit (she was at least the manager, if not the owner). And, before we left, with leftovers I might add, she dropped off a bag at our table. I later discovered it contained not ONE but TWO loaves of the delicious bread. So yesterday morning, while meditating on rejoicing in our tribulations, and before going to walk in the pool at Gold's Gym, Vanessa and I breakfasted on the first fantastic loaf of bread, lightly toasted and lightly spread with butter. Leaving one loaf for breakfast this morning.
And when I looked at the loaf of bread, sitting in pristine loveliness, I realized I Liked bread better than taxes. 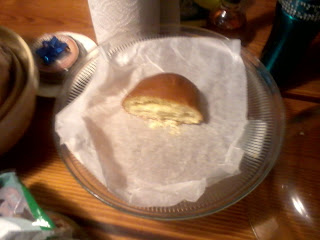 And generalizing from there, I realized I liked bread better than gold. (begin RABBIT TRAIL)Now, I don't actually HAVE any gold. I do have some silver in the form of Peace Dollars I have accumulated over the past several years. I like them for what they symbolize, not so much for what they are worth in the bullion market, and I have given both of my motorcycle riding sons at least one silver dollar each. We always carry a silver dollar when we ride; it's an Allman Brothers Midnight Rider thing, and we ARE from Georgia, after all. (end RABBIT TRAIL)
See, apart from some the beauty of the metal, and uses in electronics, gold (and silver) are really only good for one thing: buying bread. Back in my days of rebellion (from around 1969-1973) I was a believer in the saying "Dope will get you through times of no money better than money will get you through times of no dope." There is a core truth there, and if you substitute the word 'bread' for the word 'dope', then that's what I was thinking this morning. Now, it is true that my feelings toward gold were somewhat negatively impacted by the fact that I'm going to have to devote some unpaid hours as Uncle Sam's accountant today, but even when my blood is not stirred by such feelings, I'm gonna hold on to this truth. Do I have food, shelter, and clothing for today, for me and those I'm responsible for? Then it's enough. Everything else is gravy, and as long as They don't actually put me in jail, I care not for the IRS.
About that missing knife.
Remember the ADD thing? Well, when I walked into the kitchen this morning at around 7AM, the bread knife was sitting by the bread, patiently waiting. By the time I got my coffee, water, bacon, eggs, and sausage, the knife was gone. No one else, other than SugarBelly, my fat black Manx, was awake in the house, and she has no thumbs. So, the conclusion is that I did something with that knife. (I TOLD you that I have ADD, but you didn't believe me.) The knife is not in the sink, not on the table, not on the counter, not in the freezer with the coffee, not in the refrigerator with the refrigerator stuff, and not in my man cave. Doubtless, in the next twenty four hours, I will discover it when I sit on it.
Or maybe SugarBelly can grow thumbs when she wants to, and I will never see the knife again.
So, that deals with no review, bread, gold, and the missing knife, leaving only Texas.
I've lived there twice. First, in 1959, when my dad (a commercial pilot) was stationed in San Antonio briefly, long enough for me to start first grade at Sunset Hills Elementary School. The second time was in 1972, when I was in the Army, stationed at Ft Sam Houston for medic training. I haven't been back since 1983. Those memories tickle me when Texas comes up, and I've been tickled a lot lately by authors. Sometimes it seems that ALL of them live in Texas, or came from Texas. Has Texas become the cultural center of the universe?
Maybe so. Utah has a lot of writers, too, though, so I'm not getting a tattoo yet.