When Will We Pay The Price To Stop Random Mass Murder?

I had written something else for today, but then I discovered that a 21-year-old Woodstock man had murdered eight people in three separate shootings last night.

Police identified the shooter, and somehow discovered he was heading south. He was arrested in Crisp County (county seat = Cordele)  in a combined Georgia State Patrol and Crisp County Sheriff's Office pursuit. The location is a little more than halfway to Florida from the Atlanta area.

I'm a little confused about the locations where he committed the murders. The one a few miles from me had the word "Massage" in the business name; the other two , "Spa;" some of the articles have identified all three as massage parlors. We do know that most of the victims were female, and reportedly at least four were Korean. (And so far, Newsweek has the best information.)

I believe that it is inevitable that the same tired old arguments are going to be dragged out again.

One group will shriek "No more thoughts and prayers! Time to pass sensible gun control legislation!" and then move to ban, or restrict...something. Or, all things related to firearms.

One group will shriek "The only solution to a bad guy with a gun is a good guy with a gun!" and then decry any attempt to take action as un-American, wicked, and dictatorial.

And they will BOTH have missed the point.

I know this, because EVERY time there has been violence, they have missed the point. Actually, I don't think most of the Big Mouths on either side REALLY are invested in solving the problem. That's because it will require them to advocate for something that will IMMEDIATELY cost money.

The problem is mental health, and it's a problem because:

It was GREAT for taxpayers! At first. And the ability of insurance companies to limit just how many days they would pay for helped their bottom line. But it was AWFUL for the general public.
First, it tossed a LOT of people with poor social skill out on the street, and we had an immediate homeless problem.
Second, as mental hospitals and treatment centers had their income slashed, the budgets for services got slashed as well, and what USED to be a pretty good safety net vanished. I addressed some of that in my post about solving school shootings .
Here's what we have now:
You see, there are only a tiny number of mental health beds. The evaluators KNOW this. So, if there are not beds to place a person for treatment, then something OTHER than hospitalization is recommended. Sometime after I wrote my post on school shootings, I discovered that at least ONE time, the Parkland shooter had been referred for an evaluation, and: nothing happened. So, 17 people DIED, more were wounded. And nothing of significance has changed.
Nor will it this time, if we leave it up to the shriekers. Oh, some legislation might get passed; in fact, there is already some ineffective (legislation) which the House passed, now in the Senate. And some of the shriekers on the other side will protest.
PLEASE HEAR THIS: if they had WANTED to solve a problem, it would have been solved! None of those who shriek WANT the problem to go away, because it makes for a GREAT fund-raiser topic. Yes, I am a life member of the NRA, and they don't want the problem solved. Not saying that's true of all members, nor of other groups, but the Big Mouth doesn't want to throw this football away.
This will ONLY get fixed when We, The People, make a demand on those in state and local government to 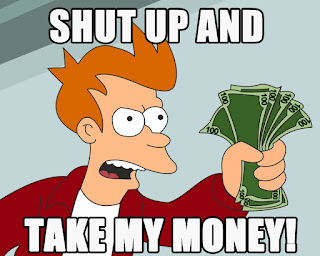 SHUT UP, and TAKE OUR MONEY,
and re-implement a public mental health safety net.
We can choose: pay for it in money, or pay for it in blood.
There are no other solutions.
Peace be on your household; and mine; and theirs, as well.
Posted by Habakkuk21 at 9:47 AM