As you saw when last we met, I was able to get my beard trimmed. I DID find my Leatherman tool, and got the batteries charged on my electric drill.
But, I could not disassemble the Ground Fault Tolerant plug on the air conditioner; the screws holding it together were not something designed to be removed by the consumer.
Ha ha, I thought. They do not know Who They Are Dealing With. One time, I clamped a 5 inch circular saw blade on a router. It didn't turn out well, and somewhere in a neighboring county, there is a circular saw blade embedded in a rafter in the attic.
But, a tool for every job, and now I have a DREMEL!!! with lots of parts. I could cut that plug in two pieces, and THEN we'll see who has a screw loose!
But, I didn't do that. It seems we had an extra air conditioner window unit, which was replaced by a better-sealing window fan during the annual stink bug migration that has been a feature of the area for the past few years.
So, I used my manly muscles to remove the defective window unit and set it on top of a big storage container by my side of the bed, and then re-used my manly muscles (yes, they ARE re-usable!) to place the functioning air conditioning unit in our window, and replaced fasteners and curtain things and stuff, and with a whirr, we were back in the land of air conditioning.
BY THE WAY!!!! A literary acquaintance by the name of Clair Kiernan has written a FABULOUS! post about Atlanta summers on her Facebook page, and if that link worked, and if you are at ALL familiar with the climate in the South, you will appreciate the yock. I, myself, yocked and yocked, and then I read it to my gift-from-God, happy-ever-after trophy wife Vanessa, the elegant, foxy, praying black grandmother of Woodstock, GA, and she yocked as well.
So, manly muscles fatigued, cool air on the way, I retired to my Sunday rest.
Did I mention that Vanessa smiled when she saw my beard was trimmed? She did.
I love it when she smiles.
Something woke me up in the middle of the night. Fortunately, I had my handy flashlight. At least, I had somebody's handy flashlight; might have been Vanessa's. So, I flashed the room. And what did I find? There, creeping along the wall, was a cute little green frog, about the size of my thumb, with sticky pads on his feet, and big bulgy eyes, and a great big mouth! Where did he come from?
Well, as near as I can tell, he had been living in the air conditioner. There's a little clean space amongst the mossy green coating where his (or her; didn't check) tiny little butt had been resting, and waiting for more bugs to come visit.
No, I did NOT shoot the little green frog with any of the assortment of firearms which are always at hand. Instead, I used a MUCH rarer item (a clean hand towel) and wrapped him up and took him outside.
And Vanessa stayed asleep through the whole thing.
But when she did wake up, a bit later, I showed her the video, and she was disturbed. So I gave her a hug and a kiss, and it was alright. But she made me check for snakes. I knew there weren't any, but I checked anyway. And she smiled.
I love it when Vanessa smiles.
Here's the frog. It's a bad picture, captured from the video I took, and blown up using Paint. Precious, right? 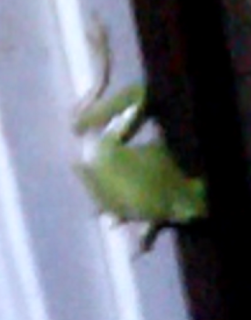