Book review: "Other Rhodes," by Sarah A. Hoyt 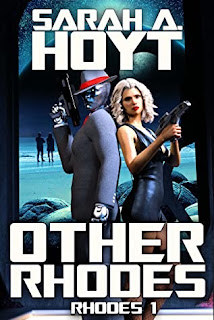 I’m slow. I get there eventually, but I’m slow.

The cover of “Other Rhodes” CLEARLY designates this as “Rhodes 1.” You’d think that I would know that this is first of a series, right? And yet, somewhere after the first half of the novel, I’m doing a frantic-bookworm plea: “Oh, this would make for a WONDERFUL series! I hope she has a series set up! This HAS to be a series!”

Well, duh. It’s first in a series. Therefore, always assuming that the Beautiful-But-Evil Space Princess doesn’t turn her hand to some other endeavor, we have delight ahead.

Delight, that is, for those who enjoy such delicacies as the Hard-Boiled Detective,  Nero Wolfe, Mickey Spillane, Sherlock Holmes, Damon Runyon, and Robert Parker. You know; like that, but different. Because, all that IN S-P-A-A-C-E!!!

A Professor of Literature who read the above paragraph would immediately foam at the mouth, exclaiming “THOSE ARE ALL DIFFERENT! You  can’t lump them into one category!” Well, I just did, and the category was “Written Stuff I Enjoy.” So there.

A silly/dumb/gorgeous secretary. Except she’s NOT silly or dumb (she is gorgeous); except she IS silly and dumb (or, at least ignorant) in the beginning. She’s a hothouse flower, you see. You’ve heard of gilding the lily, meaning that you put needless decoration on something that doesn’t need it? Well, her maiden name is Lilly Gilding. By her own admission, her early education taught her how to dance and look pretty. In that condition, she married Joe Aster (thus acquiring ANOTHER flower name), a private investigator totally unsuitable for a young lady of her status. Her super-wealthy father responded by cutting her off from support, perhaps hoping to bring her to her senses.

It actually worked, though not in a way Daddy had anticipated, and not in a way Lilly recognized. Forced into the world of work, Lilly became part of Joe’s investigative operation. Silly and dumb people can’t do what she did, and I can only suppose it was because she had never been allowed to overcome challenges that she fails to appreciate all she accomplishes: “merely” a receptionist, she masters typing and accounting, and gets her Investigator license. She becomes an integral part of Joe’s work. All of that, without realizing that she has become far more than ornamental.

That’s the ignorance that is her greatest limitation.

Joe has patterned his practice on a popular series of detective stories. Even their home base/space ship is christened “West 35th Street,” after the locale of the stories. These are presented as immersive experiences (“mersi”) featuring fictional and flawed detective Nick Rhodes and drop-dead-gorgeous partner Stella D’Or.

Joe loves them; Lilly does not. However, when Joe shows up transformed and incapacitated, the silly/dumb Lilly realizes that the solution lies in the mersi story.

And she takes appropriate action. Excitement and intrigue ensue. The foundation for a series is laid!

Apropos of nothing, the real West 35th Street in New York is home of the Church of the Incarnation, celebrating the appearance of the Divine in another form. But that is a topic for the Professor of Literature.