A Dragon and Her Girl, LTUE Anthology #2

For those of you running an ad blocker: 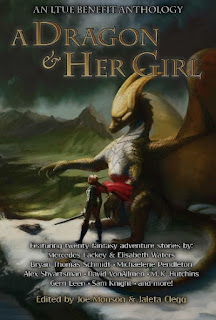 A Dragon and Her Girl

Greetings to all of my Internet friends and neighbors, with an extra cookie for those of you who are a part of the LTUE universe. And for family members who have stumbled upon this post, please kiss my new granddaughter for me, as well as all the rest. I WILL show up. Eventually. With presents.

PRELIMINARY MATERIAL
Confession: Some time ago, I was given a review copy of the LTUE release for this year, “A Dragon and Her Girl.” I rather ignored it.


So, bruised and battered by circumstances, alienated by the potential for purple prose and Neo-uber-feminist tractation, I balked. HOWEVER! The proceeds from the book sales go to funding scholarships for students to attend the conference.(NOTEWORTHY!) Furthermore, I loved the work submitted for first anthology in the series, “Trace the Stars,” that I felt I owed it to The Most Reverend and Learned Doctor Joe Monson (editor) to read it. So I did, and it was lovely. And I hereby offer my apologies for forming an opinion without evidence.
All proceeds from this review will be matched (up to $100) and donated to the LTUE Scholarship fund.

THE REVIEW
The cover art (above) is magnificent, the sort of thing you might want to hang on a wall for friends to view. Donated by a person not previously known by me, a certain Kaitlund Zupanic, there is much to be admired here.

A Game of Stakes Max Florschutz
Victoria, daughter of famous Count Antares, the Wolf, is seeking a husband via a dragon, Dostoy the Mighty. She has established three challenges for her prospective suitors: The first was that a suitor had to be fleet of foot enough— or clever enough— to make it to the Stakes board with Dostoy defending it. The second was that they must beat him in a game. And the third was that she herself would duel them.

Dragon Soap M. K. Hutchins
These are smallish dragons, about the size of a raccoon. And they aren't really ENEMIES: more like pests. They keep stealing radishes. Somebody has been messing around with the ecology, it seems. And the poor folks who live way out in the woods are the people who are paying the price.

Li Na and the Dragon Scott R. Parkin
Unique among these stories, this is a tiny slice of, at least, a novel. It's more likely that the story will need multiple installments. Li Na, the protagonist, has been tending to the worship of the dragons in her household for her entire life. With the birth of her seventh daughter, multiple threads come together to form a crisis.

High Noon at the Oasis Jaleta Clegg
She’d turned into a horse, somehow.  She couldn't recall much of anything that took place before that. But she could smell out magic, and water, and even lies, and somebody was going to pay.

The Wild Ride Christopher Baxter
We have a husband-wife team of something with tusks; we have a wild dragon round-up. Each one is going to grab a wild dragon, ride it to the end, and they hope to use their winnings to buy their own ranch. They might die, though.

Rising Star Michaelene Pendleton
Near the end of a wild pursuit of a mage, a dragon gets slammed through dimensions into the desert outside Los Angeles. And there, she finds a Hollywood agent at the end of his rope.

The Diamond-Spitting Knight S. E. Page
All she wanted was to be a princess. With a tiara, and everything. But somehow, the gifts that pixies give always turn out to be a pain, and she gets imprisoned, more or less, because she spits jewels when she speaks. If ever a fair young maiden needed rescue, it was poor Millet.

Amélie’s Guardian Bryan Thomas Schmidt
This is a pure, sweet tale of redemption, birthed by mutual need and affection.

Aer’Vicus Jodi L. Milner
A girl and a dragon learn together, and that's a good story; however, a throw-away line grabbed my attention, and is one of the best parts of the entire book. Here it is:


“It’s as if you are a mouse standing on a corner of the road squeaking as loudly as it can about the surprising lack of cheese in its life." (Joe Monson and Jaleta Clegg. A Dragon and Her Girl (Kindle Locations 2497-2498). Hemelein PUblications with LTUE Press)

Loyalties Josh Brown
Anessi has fought to keep her people alive, even though most of them have died in the process. When she is sent on a mission to kill a dragon, she finds the end of her quest.

Ash and Blood Hannah Marie
I'm not sure, but I THINK that this story illustrates the corrupting nature of power. It's certainly gory enough, with a more than ample casualty list.

Therapy for a Dragon Sam Knight
Hmmm. Marjorie, strapped onto an interrogation couch, certainly needs dragon therapy. I'm not quite sure that the therapy is for the dragon, though.

Taking Wing Julia H. West
The little crippled girl, Sofria, sat on one corner of the widest street in Tarnisi. And, over time, she began to speak with the gargoyle perched high above her on the ledge. And it spoke to her, as well.

Lullaby John D. Payne
Any parent of multiple small children knows the middle-of-the-night torture of dragging yourself out of bed to care for one (or more) who is sick, or hungry, or lonely, or wet. Dismal, dismal, dismal. But, at least you have the hope that they will grow out of it. Dragons, though, live for a very, very long time.

Rain Like Diamonds Wendy Nikel
In a time of drought, with the people starving, it falls upon the monarch to heal the land. That's the price of ruling.

Here by Choice Gerri Leen
You had one job: guard the woman who was ready for paradise. Wait; she changed her mind!

Dragon’s Hand David VonAllmen
Well, this one is a combo: you get magic, the Old West, and card strategy, all mixed into one.

Take out the Trash Melva L. Gifford
Snicker, snicker. I don't know how many puns are hidden in this little beauty. It really is about taking out the trash, at a magic school.

Burying Treasure Alex Shvartsman
Okay, somehow, we wind up with a dragon on the throne. But this is a SMART dragon, who puts into place significantly enlightened policies which will, eventually, result in prosperity. In the meantime, though, there are some unemployed soldiers around.

Dragon in Distress Mercedes Lackey and Elisabeth Waters
Turns the hero-rescuing-maiden-from-dragon story on its' head, but it's a bit pervy, too. Adults only.

Okay, so that's my review. I think LTUE was over yesterday, so the book ought to be live on Amazon now. Here's the link, if you want to learn more.

Peace be on your household.
Posted by Habakkuk21 at 5:06 PM