Stellaris: People of the Stars


And, for those of you running an ad blocker, here's the cover image: 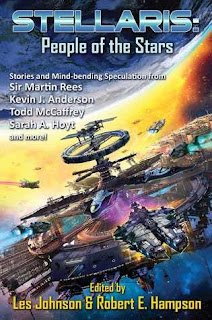 And here's the link!

Greetings to all my internet friends and neighbors, who have long been wondering if I was EVER going to return to my review habits. And to any of my family checking in, I still don’t have that family reunion ice cream recipe.

Some recent history. A few days ago, scientist/author Robert E Hampson, who has aliases known to many, pointed out that he had requested that I review a book.
Last August.

Now, at the time, he very graciously accepted the reality that I was in the throes of reviewing the nominated works for the Dragon Award, and couldn’t interrupt that frenzy. No problem, he said. Just get to it when it’s convenient, he said.

Well, neither he, nor I, had any idea that circumstances (armed with a bludgeon) were on the way, or else we might not have been so casual about the arrangement. But that, as they say, is all water over the dam, washing away villages downstream and creating havoc and establishing conditions for disease epidemics. So, we shall speak no more of that, and simply proceed with the review.

What kind of book is this? It’s the kind that will last you a long, long time, IF you are somewhat like me. I know this because a series with a similar format has lasted me for nigh on 40 years. I speak of “There Will Be War,” edited by the late great Jerry Pournelle, and the illustrious (or, wonderful, delightful, inestimable, still alive) John F. Carr (and if I were to allow myself to launch into everything I wished to say about this and them and that,  nothing else gets written. So, forcible stop).

More specifically, it’s an anthology that addresses a single topic (the future of humanity in space) through a combination of short fiction and non-fiction articles. Now, IF you are somewhat like me, you are going to immediately devour the short fiction first. And then, over time, you are going to return to the non-fiction, and you are going to become involved much more deeply. I tried to come up with a food comparison, as in fast food versus Thanksgiving Feast, but I could think of nothing that will do justice to either component.

Just know this: the short fiction also educates, and the non-fiction also entertains. Also know that the environments being considered for human life are lethal, so that failure to make the right choices, every time, results in extinction.

Foreword by Robert E Hampson. PLEASE don’t skip the Foreword! Not only do you get the story of the genesis of this volume, you also get a brief, interesting review of problems already encountered in real life in sustaining human life in space, as well as the science fiction treatments.

Burn the Boats by Sarah A. Hoyt. They say Sarah A. Hoyt is a real person, but I’m not so sure.  I’d say that she might be a cyborg, but for two things: she writes about cats in a way only a human could; she also ALWAYS respects the science in a story, but her stories are incredibly perceptive studies of the PEOPLE who interact with the science. The people in this story must accommodate themselves to changes they had NEVER considered, or go extinct. And they have children.

Bridging by William Ledbetter. At first, I thought this was a Norse fantasy, and I recoiled; I mostly don’t appreciate fantasy. It’s NOT, though; it just incorporates names (and maybe themes) from that mythology into a science fiction. There are two groups of space colonists living in close proximity, but one lives under a gravity field much stronger than that of Earth, while the other lives in free-fall. They hate and fear each other, because of ancient stupid acts, but if they can’t find a way to join, they both are at risk of going extinct.

The Future of Intelligent Life in the Cosmos by Martin Rees. The first non-fiction article in the collection, this one is particularly wide-ranging. (First impression? It’s more of a concept dump than I prefer.) Advances in bio-tech, AI, and space propulsion are all essential. A significant point: if the exploration is funded by the government, can the level of risk needed to progress be accepted? He thinks not.

Stella Infantes by Kacey Ezell and Philip Wohlrab. There is a tiny sub-plot in one of James Michener’s massive works (I THINK it’s “Hawaii,” but am not sure) about the missionaries who were sent on long voyages to set up missions on potentially hostile shores. Despite their reputation of being sexual prudes, almost all of the young couples had their first child SIGNIFICANTLY before nine months had elapsed after reaching their destination. If it was like that on long sea voyages, what about long space voyages? There is plenty of discussion here about medical implications of space pregnancy, and for that, I feel certain we can thank Wohlrab. Ezell, once again, utterly fails to disappoint in her ability to make a person in crisis come alive.

Maintaining Crew Health and Mission Performance in Ventures Beyond Near-Earth Space by Mark Shelhamer. With respect to long-term residence in space, it doesn’t even appear that we know what it is that we don’t know. Shelhamer examines the current process of assessing the risks, and then moves forward. The ability to simulate living in a gravitational field appears to be essential, but there is no way of controlling for everything that MIGHT happen.

At the Bottom of the White by Todd McCaffrey. Although there is some nifty tech in the story, most especially the technique of using people in re-entry ships to ‘bounce’ cargoes up and down (just read the story, ok?) what really makes this story pop is the evolved culture of a long-term trader, journeying between star systems, which have developed on their own, in isolation.

Pageants of Humanity by Brent Roeder. Tee-hee! Roeder has captured the brainless chatter of talking heads, providing commentary on a beauty pageant in which the outcome determines whether a far-flung system still meets the requirements for humanity. It contains some well-conceived rationale for making the determination, but it’s such a yock to read it presented this way. Loved it!

Homo Stellaris — Working Track Report from the Tennessee Valley Interstellar Workshop by Robert E. Hampson and Les Johnson. Ummm...this is the report. It’s PACKED with info, and if you have any interest in people in space, read this. It’s a summary of a LOT of work, and I can’t further distill it.

Time Flies by Kevin J. Anderson. If you have chosen to travel, but not to arrive, how do you manage to do it? These are people who trade information and goods between far-flung star systems, and they have the technology to go into a super-slow time. Every so often, they shift from slow to normal time, to check on ship functions, and when approaching a planet. If you were able to, essentially, live forever that way, would you do it?

Our Worldship Broke! by Jim Beall. Although NICELY presented, I had to ask for help on this one. Fortunately, my son-in-law, Sam Blackstone, used to be one of the guys who run the nuclear tea-kettles on a submarine (and that’s all he can tell us). So, I had him read this one, and he said: a person without some engineering background might struggle with how some of the concepts work with each other. He really liked the accuracy of the article “speaking directly about the success of nuclear power and how the Navy organized it from the very beginning;” the people, places, and things Beall references are all as described. Sam also suggested I’d find reading up on Hyman Rickover, the Father of Naval Nuclear Power, to be interesting. Thanks, Sam!

Nanny by Les Johnson. The POV swaps between Angela, beginning when she is age nine, and Manuel, an adult crew member on an interstellar voyage. Soon we begin to wonder: how did all these kids wind up with no adults? We find out.

Those Left Behind by Robert E. Hampson. Melisande, bka “Mace,” and her older brother Sandy are dedicated space people. Besides having the brains to do the science, they were highly motivated to get a way from home essentially destroyed by Dad’s alcoholism and Mom’s fluttering from cause to cause. So, they both opted for some physical changes, to make their bodies more adapted to working in space. A final home visit for a Thanksgiving meal became explosive (or nearly so).

Securing the Stars by Mike Massa. You cannot allow sabotage, or even sloppiness, to interfere with spacecraft systems; there are no convenient repair shops. Massa identifies some similarities between the isolation and hostile environment on a space mission with some Earth-based environments; the conclusions are inescapable: a space mission isn’t a democracy.

The Smallest of Things by Catherine L. Smith. Just because SOME things are similar in our exoplanets, that doesn’t mean they are really Earth-like. Smith shows us the challenge of alien strangeness, compounded by human goofiness.

Biological and Medical Challenges of the Transition to Homo Stellaris by Nikhil Rao, MD. Before we go, while we are going, and once we get there: what can kill us? What can just mess us up? Well….lots of things. Here are some of them.

Exodus by Daniel M. Hoyt. (Okay, if Sarah A. Hoyt ISN’T real, then they are doing a really good job of covering that up.) Ginny is a science geek born to parents who “Only know of physics like Ex-lax,” and are proud of it. She devotes all of her efforts to get away, but it turns out not to be that easy, because, evidently, a LOT of people want to get away, and then she finds there are some things hard to leave. This story does an EXCELLENT job of showing the results of alternative, and competing, research tracks: if the other guys make it work, all that you have done may go into long-term storage.

Afterword by Les Johnson. Nicely reflective on What It’s All About.

Tennessee Valley Interstellar Workshop,  by Joe Meany. A further explanation of the group, and how to join them in the goal of becoming People of the Stars, Homo Stellaris.

Well, there you have it. Grab a copy of the book, and read it for the next forty years.