Greetings, internet friends and neighbors! And thank you to my loyal family members who are striving to help me find fame, fortune, and a meaningful existence by reading this blog. Umm, let's just forget about the fame and fortune part, shall we?

I wasn't planning on this being a blog post. But when I got to the bottom of the second page in the book review, I realized NOBODY was going to read that, not even the authors, so in order to preserve what I had taken so long to write, I dumped it here. Now I have to go back and slash what follows to make it fit.
Here's the slashed Goodreads review; I've submitted the Amazon review, but it hasn't posted yet. When it does, I'll post the link in the comments.

Warning: the main text (which follows)  is 1247 words. That's only 1/10 of the words in"Nightfall," by Isaac Asimov, though, so I'm certain that a few of you loyalists will find your way clear to read it.

Okay: if you are running an ad blocker, you WON'T see this (it's a link to Amazon to buy the book):

I do not wish people WITH ad blockers (as I do) to suffer data denial, so here is a link for YOU, followed by a NON-LINKABLE picture of the cover. 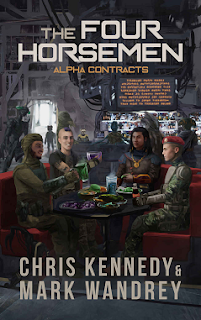 
First, a confession. (And yes, I DO seem to be doing a lot of those lately.) When I looked at the cover art, I thought, “What the heck is going on here? What in the WORLD can the artist have been thinking! That's the worst rendering of a fat Jim Cartwright possible!”

Sigh. I was half-way through Chapter 1 before I realized that, duh, ALPHA CONTRACTS!!!! This is the ORIGINAL Cartwright (also named Jim, though), and NOT the obese-shading-to-merely-rotund Cartwright of Cartwright's Cavaliers and the other mumble mumble books in the 4HU. And the original Cartwright wasn't operating with the same burdens (see what I did there?) that the most-recent Cartwright had to struggle under, hence wasn't a Tub-O-Lard.

The artist is right; I was wrong. On with the review!'

The primary focus is on the companies which became the Four Horsemen. However, the writers include small snippets from another company, the Avenging Angels, to remind us that 96 of the contracts ended in the extermination of the humans. It's a very well-done bit, and the method of the telling, which is correspondence with home, makes sure we know that it wasn't Companies who died; it was individual people, with hopes, dreams, and families.

Note: because the book deals with the main history of each of the companies separately, there is some repetition of scenes in which more than one company is involved. Feature, not a bug.

First, Cartwright's Cavaliers. Jim Cartwright is owner/operator of Cartwright's International, an independent contractor supplying security and transport in parts of the world where booms can ruin a perfectly good trip to the market. He has a number of significant employees, including Nina, a young woman of short stature who is highly proficient at making bad Enemies into good Enemies,  with the .50 BMG being her ammo of choice.
We discover that Cartwright combines a love of action with a first-class business mind, and that he has started and sold numerous highly profitable companies, all of them selecting resources that no one else thought existed. He MAY have some sort of built-in early warning system, because he gets uneasy just before the aliens land, and Earth's economy is wrecked. Prior experience serves him well; alone of all the potential mercs, he understands the value of research. Seeking such, and bearing gifts/bribes, he seeks counsel from the only military officer who has a clue about fighting aliens, Col. Kuru Shirazi of the soon-to-be-extinct Iranian Guard.
And I'm not following the story further, because spoilers. Just remember: Jim Cartwright may have some pre-cog, or his genius may be extrapolating from available data, and he is a firm believer in preparedness.

Next, Asbaran Solutions, seeking to carry on the tradition of the knights who lead the Sassanid army in the closing days of the Persian Empire. They are mostly drawn from the remaining units of the Iranian military, which has taken a SOUND beating as a result of the suicide bombing of the visiting aliens at the UN vote to adopt a global government. In response, the MinSha had turned most of Iran into slag, then raided much of what was left over for booty. In almost every case, Resistance WAS Futile, but there were a very few notable successes, hence Jim Cartwright's visit. Reading the signs, Col Kuru Shirazi led remnants away from the lethal entanglements of what was left of Iran, and also away from the jackals fighting over the corpse, and established New Persia, under civilian leadership.
This separation from the country now mostly consisting of radioactive glass solved a number of problems for those left alive, but for Shirazi, a principle benefit was that it would support the efforts of the merc group he established.
From his own experience, significantly clarified by his contact with Cartwright, Shirazi was convinced of the futility of force-on-force conflict with aliens. The few wins (which no one else had accomplished) had been achieved through tactics lumped under the term 'asymmetric warfare.' And that's the specialty Asbaran Solutions picked for their company.
Long enmity with ...(practically the rest of the world, but a few countries in particular) was a difficult obstacle to overcome, but Shirazi found he was able to unify others by their hatred of the MinSha, and by extrapolation, the entire Galactic Union. This was a solution devoutly to be desired by his comrades. Thus, from the beginning, his company was a Solution: to the problem of association with a dying, lethal country, and to the problem of the lost honor, stolen by the MinSha. It also made for a nice front for prospective clients: whatever your problem, we are the Solution.

The Winged Hussars. Lawrence Komalski was an information technology genius, and a person with great expectations. Specifically, he expected to inherit control of the family shipping business, while his less-competent cousin was sent out to pasture with some money to play with. Unexpectedly, at the reading of his grandfather's will, he discovered he had been outmaneuvered, and his cousin got the company. The beating his cousin also got, at Lawrence's hands, locked up in Warsaw's Rakowiecka Prison. (Note: this prison is REAL, and HIGHLY worth the time it will take you to google it. In fact, here's a link I followed.). His cousin runs the company into the ground, and springs Lawrence from the slammer to fix things. This Lawrence does.  One of his earliest changes allowed his merchant ship officers to receive military training, which turned out to be a critical choice.
No amount of beatings could introduce good sense to his cousin, who spent all of the resources on the company buying what he thought was a space-faring cargo ship; it turned out to be a worn-out warship.  He then compounded that error by signing a merc contract, to serve as an armed escort for an assault group. If the contract is fulfilled, it will redeem Komalski Shipping; failure will bankrupt it. And, the contract stipulates that Lawrence has to be a part of the crew.  The job goes badly.
Look, you KNOW it HAS to work out in the end, right? Because Winged Hussars are part of the Four Horsemen? You MUST read this to find out how Lawrence pulls THAT off.

The Golden Horde. If ever I read in prior books in the series that the Golden Horde merc company emerged from a drug-smuggling background, I neglected to store that fact in memory. What I retained is that the leader, Madame Enkh, was ruthless, and that she had prescient dreams, and that the Horde traced their legacy to Mongol origins. And that family ties are very, very important.
Drug trafficking IS a high profit-margin business, but it's also a high-risk business as well. The cops can be bought off, in many cases, but the competition never stops. And the discovery that one of their competitors has access to alien hardware makes current business practices untenable for the Gray Wolves, the precursors to the Horde. Even worse, the casualties they suffer are family members, and it takes a LONG time to turn a zygote into a team member.

It's tough enough to get arms, but the disintegrating corpse of the former Soviet Union provides opportunities for scavengers, willing to take some risks. Where do you get subordinates who will be bonded like family, though?  There must be SOME way...

Thanks to those who took the time; comments are always nice.

Peace be on your household.
Posted by Habakkuk21 at 3:32 PM