Greetings, Internet friends and neighbors, as well as the occasional family members who have managed to creep in here despite my invitations to do so.

Today, I was able to get discharged from the hospital, where I have spent nearly two weeks dealing with an obstructed bowel. It appears that I had a bit of scar tissue which constricted a tiny segment of gut, and resembled a belt loop. Snip, and I was set free, only to spend interminable days recovering.

de·fen·es·trate
/dēˈfenəˌstrāt/
verb
But that's not what draws a defenestration warning. I DO have some rather sharp words to say regarding the lack of care received during the initial hours of my hospitalization, but won't share that here until I share with the hospital itself (and maybe not then). Not an issue of privacy, or delicacy on my part; I just don't want to bleed off steam I need to excoriate on the blog.

No, the defenestration pertains to the fact that I have some reviews of rather lovely books due. One (or more) of those is a collection of stories, and MOST of the stories are Suitable For Framing : lovely works of art, worth hanging on a wall (book shelf) and examining for the sheer joy of story, well executed. A couple are NOT.

I try to avoid trivializing language. Some months back, I wrote of the value of
euphemisms , which is one way of avoiding word-value creep. If strong language is to remain strong, it must be used sparingly, else, it loses impact.

Similarly, when I encountered one particular story, I had to boldly resist the temptation to say "%$^*& this story," as I felt it would be lazy on my part, and not fully complete the sentence I wish to impose. After some significant amount of time wrestling with the RIGHT word, 'defenestration' is the term I came to believe to be the best descriptor.

Note that I wish to see the sentence executed in this format: I wish to have the typewritten copy, still attached to the platen of a manual typewriter, tossed from the upper story of an office building. Sheets of paper may accompany the downfall, as long as there is a sound of a crash at the end of the journey. 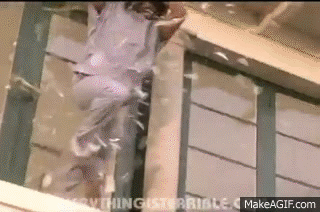 I fully accept that there is plenty of room in the tent for all kinds of writing; the story I find particularly egregious may delight someone else.


NOTE: I do not believe the previous statement, not at all; anyone who likes the story I wish to excoriate is just plain wrong. The editor should have sent this one back, with a smelly sock attached.

So, be forewarned. It's a story (actually, one story, and ALMOST another story) in the otherwise MARVELOUS collection "Noir Fatale."  And to avoid needless dithering and worry, neither the  primary nor the secondary targets of my ire were penned by helicopter pilots, college students, furniture refinishers, or people who write delicious stories about delicious cupcakes. Further, the deponent sayeth not, while reserving the right to expand and extend at later date.

Peace be on your household.
Posted by Habakkuk21 at 8:17 PM