The Latest installment in 'The Eerie Side Of The Tracks.'

Once again, I must proclaim my intent to keep my Amazon reviews brief, while not depriving myself of an opportunity to remark on things I find most intriguing about a book. In this case, the review itself wasn't that verbose; it was the supplementary content that went long. So, here it goes; an ABBREVIATED (if not eviscerated) version of the review follows, for those who simply can't find it in their hearts to read that first. If Amazon will cooperate with me in quickly publishing what submitted at 9:50 AM, I'll include the link to the review HERE; otherwise, I will include it in the comments section. (they cooperated, but at 1:40 PM)

The Eviscerated Review. The Sarah A. Hoyt cover is a feast for the eyes. Spend some time admiring it; just don't go Pygmalion with it, if you don't mind. That never works out well.

The dark beauty depicted is Meg Sheridan, a lawyer, former Army officer, and 'elemental' magic user.  In Meg's case, the element is air, and her power extends to those things which routinely accompany great movements of air, such as rain and lightning.

She was raised as a DEFINITE outsider elsewhere,  which was hostile to her and her mother, because of their abilities to use magic. She escaped by going to college, then the Army, but kept in close contact with her mother as she built her career as a lawyer. Despite that, she discovers her mother has hidden an illness from her when she gets a phone call that her mother is dead. That's followed immediately by a terse letter from her mother, telling her to return to Mossy Oak, and get in touch with a woman she has never heard mentioned.

More unexpected things happen than she is quite prepared to accept, including an attempt on her life. It takes her rather a long time to discover the reasons her mother sent her to Mossy Oak, and why she kept it a secret from her.  Finding the solutions to these issues, and the revelation of additional crisis points, forms the structure of the book.

End of Eviscerated Review. That's a LOT more succinct than I ever want to get in writing a review, but I THINK I covered everything that Amazon published. For those of you who write, and especially those who write reviews, your comments about appropriate brevity will be entertained, and maybe even adapted.

Fascinating and Itchy Points. These were cut in their entirety from the review; however, there ARE those of you who have said that you enjoy this sort of thing, and I sure enjoy researching and writing them, so here goes.

Fascinating points for me: Main character Meg, in addition to the lawyer/magician thing, is also a biker, and rides into town on her Harley. I'm a Honda man myself, having owned many bikes in increasing displacements since I got out of the Army in 1975. 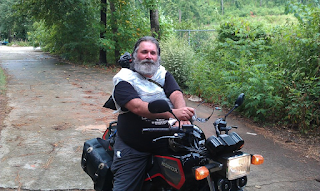 This is me on my current bike, a  classic 1985 Honda Sabre V65.
I'm wearing improvised rain gear, also known as a garbage bag.

Now, I like Hondas, but the PRIMARY reason I'm a Honda Guy and not a Harley Guy is because I started small, with a Honda CL175, and closely linked to that is the fact that I probably paid about $300 for my used bike, while the smallest Harley at the time was a Sportster, and would have cost me at least $2,000, if my google-fu is working.

Even so, I know enough to know that the Harley-Davidson SuperLow model she picked is the perfect choice for her, if Harley is the way she wanted to go. It's as close to a good all-round entry level bike as Harley has ever offered, but it also has enough WHOOMPFFF for old cats like me, as well as small statured people. The seat height is around 23 inches; compare that to my current bike, with a seat height of 32 inches. My bike is so tall that it ALWAYS was a bit difficult to climb on, and when I'm having a muscle spasm, nearly impossible. So, she has good sense, along with somewhat expensive tastes and sizable component of rebel.

Also figuring in the story is a vintage Indian Chief motorcycle, which would likely bring at least $35K on the open market, and possibly as much as $75K. Back in pre-WWII days, it's my understanding that Indian was the chief competitor of Harley Davidson, and they are still spoken of with awe. A few years ago, I looked at the latest attempt to get them back into being a market force, and they ARE lovely, but they are priced WAY out of my range.  But, if you want to turn heads, you will surely do it with one of these bikes. 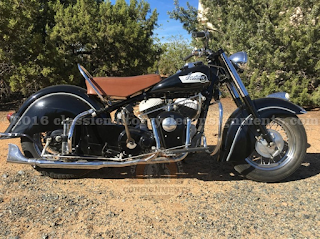 1953 Indian Chief, pristine.
This one was rebuilt from New Old Stock parts,
has matching serial numbers, and
only costs $75,000.


Expensive cars are also a bit of a factor, but that's a mode of travel I regard with indifference.

Gunfire described is appropriate for the scene, and extensive training on the range is the recreational activity favored by Meg and her new allies, further making them my kind of people.

Itchy points for me: There are three occasions where something/someone is introduced, and I expect more information, but it isn't brought up again. I'm gonna mention the most trivial, basically to show you that I'm DEFINITELY ADD, I also have a bit of OCD behavior mixed in:

About 3/4 of the way into the book, Meg is awakened by a knock on the door. According to the text, the knock, PLUS her bladder, let her know that there are other things she has to do with her life rather than sleep. Then, the narrative has her get out of bed, go to the door, and leave with the woman who is standing outside waiting on her.
And I was left, crossing my legs, in sympathy for her unrelieved bladder!
Please believe me when I say that I was NOT longing for a detailed description of the lady's morning visit to that most private of rooms in the house; that's not an item of interest for me. And I ALSO don't believe that good writing consists of a moment-by-moment documentation of the actions of every person in the book. It's just that in THIS case, Green's HIGHLY competent writing had me believing that I WAS following the main character step-by-step, and she didn't get a chance to go to the bathroom!

I feel relatively sure that this is a petty quibble, and there was no way that I'm gonna penalize the rating for an unreported potty break, BUT it was an itch in my reading that I wanted scratched.

There were two other cases where characters/settings were introduced, and were interesting enough that I expected further development, but it didn't come. In one case, I think the intent was to draw some parallels to prior character introductions in the series, not to start a plot device in THIS story.

This may just be something we have to accept when great writers have a LONG story arc. I clearly recall in one of James Michener's massive story arcs the inclusion of a jar of dough for making sourbread, which pops up in the story over several generations. At first, I thought it was SURE to be included because someone was going to die from eating it, or something like that, but it's not. He's just talking about the way sourdough bread is made.

At any rate, I mention this in case anyone else is as persnickety as I am in looking at the details, and to let you know that (SPOILER ALERT) it is All Right. Meg doesn't die of a burst bladder, nor does she have an accident in public that Depends could have ameliorated.
I don't know if that REALLY is a spoiler or not. You will notice that I did NOT say whether Meg dies; just that she doesn't die of one particular cause. So there.

And the verdict is:  I found this to be a nicely done book in the series, adding on to the stories of existing characters, while also giving us more of the back story of Mossy Oak and the residents. We still don't know what makes this Side of The Tracks Eerie, and to my mind that means we will get some more of these. I certainly hope so.

Peace be on your household.
Posted by Habakkuk21 at 1:50 PM