Let me make this clear up front: this is NOT a carefree post. It's not a joke, it doesn't have a punchline.

However, I have observed that there are moments of raving hilarity in my life, not always of my doing.

I broke off another piece of the temporary bridge in my upper jaw last night. That makes five, I think. Got these stumps of teeth poking out of my jaw; I look like the most ignorant redneck in the woods. And I can't get it fixed right away, because in order to fix my TOP jaw correctly, I have to fix my BOTTOM jaw correctly. I can't afford to pay to have my bottom jaw fixed, and they won't extend me a bottom-jaw dental care loan until I pay down more of my top-jaw dental care loan; which I am doing.

It wasn't supposed to take this long, but there was a snag.

On the VERY DAY that I initiated the top jaw dental work, my gift-from-God, happily-ever-after trophy wife Vanessa, the elegant, foxy, praying black grandmother of Woodstock, GA, quit her job. I was actually sitting in the dentist's chair when she called me on the telephone to tell me.

Now, this was REALLY good news. I had not wanted her to take that job in the first place. In fact, it took a little push from God for me to accept that she needed THAT PARTICULAR job - a legal paraprofessional at a large law firm in downtown Atlanta - as a boost for her self-image (it was a LOT of money). However, some 14 months later, it was obvious that certain people there were crazy mean; the commute was awful; and no amount of money could offset that.
I wanted her  OUT, O-U-T, of there.

So, I was delighted that she finally stopped trying to smile (and pray) her way through the Country of Cannibals. I didn't even have to go explain things to her bosses and co-hostages in a way they could understand! I remain exuberantly happy that she made the very best choice available.

Paying for teeth can wait. I don't have to look beautiful for anyone but her (and she usually wants me to keep my mouth closed anyway), and we have socked away enough money to keep going for a while.

But, it's been two months now, and she would really like to go back to work. Not necessarily as a legal parapro, although that's where the money is; she is interviewing tomorrow as a caregiver for homebound seniors, with a program that allows them to stay out of residential care facilities a bit longer. She's kind of excited about that, but...

...she worked for YEARS to build her skills up to the point where she is being actively recruited by headhunters. Will she be able to walk away from the high pay/high stress/ high prestige positions?

Actually, yeah, she can. Sort of. See, we have all had our priorities clarified around this place recently, to the point where jobs (and teeth) just don't seem as important as they used to.

My brother-in-law, Chuck, the husband of my baby sister Wendy, is a man who has never, EVER been sick. He eats right, he was a runner, just generally living a healthy lifestyle. He was in MUCH better health than me, and he and I are almost exactly the same age. I don't know why he was like that; maybe he got used to having to be in shape from all of those years he was performing his music in clubs and theaters and juke joints and hotels and other places with a sound system. Amazing musician.

And then, in August, he got pneumonia. Except it turned out to be something more than pneumonia. It's a special kind of pneumonia that ONLY hits people who are healthy, and have no risk factors like smoking or asbestos exposure.

And it kills them, fast. There is no known cure; the ONLY thing that has shown success is a lung transplant. And Chuck got too sick, too fast, to even get to the beginning stages of that.

He's in an intensive care unit, with one machine breathing for him, and another cleaning his blood, and he is fighting so very hard to get better. The fingers that played a million songs on  a hundred keyboards and a thousand guitars are being held by Wendy, his darling wife of 34 years; and she sits by his side, and she prays for him.

And Vanessa and I sit with him, too, even though we are a hundred miles away. And I pray; and Vanessa prays. It brings peace to my heart when she prays, because when the tears flow down her cheeks, I know that the fervent prayer of this righteous woman is heard by the Most High God, and there is nothing missing from her supplication. I know, then, that we have done all that can be done for Chuck.

And that sort of experience shows you just how trivial jobs are; it shows you how teeth mean nothing. Only love means anything; and Vanessa remembers the love Chuck showed her at his house, shortly after she and I were married. She wasn't sure if this bunch of Southern white people were going to accept the black woman from North Carolina; and when the time came to take a family picture, she took a step away. But Chuck saw her; and he's from North Carolina, too. And he said, "Vanessa, you're a part of this family now, get in there with the rest of them." And Chuck took the picture, and his love took my wife's heart.  Here's that picture: 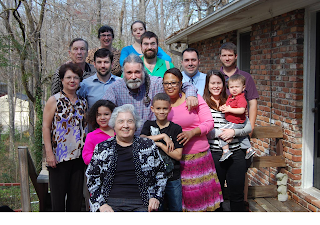 Only love means anything; but sometimes, that's hard to remember. So, today, as Vanessa and I carried Chuck and Wendy in our hearts through busy-ness, with broken cars and broken teeth, no jobs, and appointments, and schedules, God sent us a special angel to remind us to trust Him.

And I took a picture of him. Here he is: 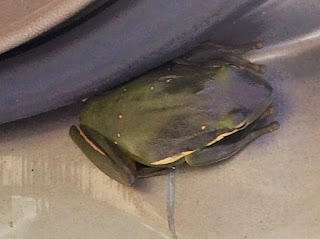 On this coolish fall day, this tiny frog was huddled into the shelter made by the driver's side door of the frame of our truck. And I didn't want him to be injured, so I picked him up, and put him into my (empty) coffee cup, and stuck the cup into the cup holder.

He escaped while Vanessa and I were in the store. And it took me AT LEAST five minutes of earnest persuasion to get the black woman to enter the car where a tiny frog was running free. I had to promise to check thoroughly to make sure he wasn't going to drop on her, and I promised not to tickle her neck, or yell 'BOO!'

I did make gack-goon sounds, though.

And eventually, we made it home, although she was shuddering for most of the way. And I'm sure she was planning some sort of revenge.

But then, I got it. And I shared it with Vanessa, and she got it as well.

It's the message He wanted us to hear, as we dealt with the little stuff, like teeth and jobs: Fully Rely On God. FROG

It's the message He wanted us to hear, as we walked with Chuck and Wendy in our hearts, and prayed for the gifted musician and the gifted educator: Fully Rely On God. FROG

The truth is that NONE of us is guaranteed tomorrow, or even the next breath. We only act like that's true because it's the only way we know how to live; and I suppose that's the way to do it. We lean forward, and just before we fall, we put a foot out, and discover we have taken a step. And one step at a time, we will proceed.

Just as long as we Fully Rely On God.


Peace be on your household.
Posted by Habakkuk21 at 7:17 PM