My Grandson's Name is Laughter

A short Bible lesson in modern language.
Abraham and Sarah were old, old, old; long past the time of child-bearing. It was a matter of grief.
Then one day, God shows up, with a couple of angels, and tells Abraham that in a year, Sarah will be holding a baby.
Sarah laughed.
And God heard her, and remarked on it. Of course, ya know, she said "No, God! I wouldn't laugh at You!"
Probably EVERYBODY laughed then! They would at my house, I know that. My gift-from-God, happily-ever-after trophy wife Vanessa, the elegant, foxy, praying black grandmother of Woodstock, GA, and I aren't nearly as old as Abraham and Sarah were; but, if God dropped in for a visit, like He did with Abraham and Sarah, and told Vanessa that a year from now she would have a baby? Yeah, she would laugh. Then she would cover her mouth and pretend she didn't, and then we'd all laugh.
(Ummm...probably, I wouldn't laugh. I would be too busy throwing up outside. I'm 63 years old! I've got no BUSINESS being a new daddy!)

Anyway, in a year, Sarah and Abraham had a new baby. And they named him 'Isaac,' which means 'Laughter.' And Sarah said, "Who would think Abraham and I would have a baby at this age? Isn't this the funniest thing you ever heard of? " And everybody agreed that God had made a GREAT joke, and everybody laughed.

A modern lesson in trusting in God.
I found out on Christmas Day of 2015 that Bess and Sam were pregnant again, with their second child. It's a wonderful thing to be a grandfather! Vanessa and I have LOTS of grandchildren, and we love every single one of them. And Bess and Sam are such GOOD parents, and their firstborn son Josh is a funny, bright little man. So we were all happy.
And then, on February 3, 2016, she goes in for a routine ultrasound, and found out she had lost the baby.
If you are a parent who has an adult child go through this, you know how bad you want to take your child in your arms and make it all better for them. But there is nothing you can do, except grieve.
And Bess and Sam grieved, and then started putting one foot in front of the other. On February 13, 2016, they went out for a date night. 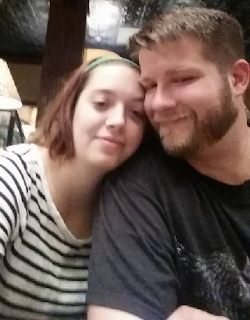 It was a tough time for this young family, but they held together, and grew closer. Here's what Bess wrote late last night about her husband, Sam:

We've held tight to God and each other through all these things, and when we could have walked out on each other and never looked back, that's when 2 stubborn, hard headed people dug their heels in and decided we weren't going down that easy. We both have argumentative spirits, and we both like being right (unfortunately for you, I just happen to always be right) and on paper, we should not be together. It should not work. But whereas other people might think we might tear each other down, we just keep building each other up.

And frankly, as a father/grandfather, to hear these words coming from an offspring at a time of intense stress: it really just doesn't get any better than that.

And  EXACTLY one year after that date night, 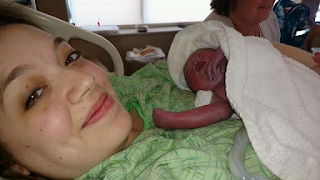 A year to the day of that first strong effort to restore themselves to normalcy.

And that's why my grandson's name is 'Laughter.'

Okay, I can sort-of hear a concern: If God is so good, why is Isaac in the intensive care unit? Why wasn't he born in perfect health?

Now,  if you are just using this as an excuse to grumble and fuss, I'm sorry; I have nothing for you. On the other hand, if you are really struggling with this, I have some wisdom I can share.

It's something I learned from a righteous man 16 years ago when I visited him in the hospital. He was in there because he had gone blind one morning in the shower. I couldn't figure this out. Why did THIS guy go blind? He has given his life to providing for rejected and abandoned children; I don't know ANYONE who has had more devoted action in their lives (except for his wife).

I asked him: "Why did this happen to YOU?" And he answered me on two levels, the physical, and the spiritual. The physical level, I got, immediately. The answer he gave me on the spiritual level shook me to the core, but when I had processed it, I had a truth that has been a driving force in my life ever since.

First, the physical level: he told me he had just been lazy. He had known for years that he was overweight, and didn't do anything about it. No exercise, no diet control, he just kept on. And, eventually, his blood sugar was so out of control, he lost his vision (temporarily). It was an easy answer, and did not satisfy me at all. Well, it did, in the sense that I saw that he was taking responsibility for his own actions, and not blaming anyone for his own failure to be prudent about his health.

But the spiritual component: that was a shocker. He calmly said "I'm just not sure that God is concerned about the same things that we are concerned about." Something in me screamed at that statement, and I started to grow up a little.

"God has an eternal perspective," he said. "We are so fixed on what's right in front of us, that we ignore the things that really matter. What's more important? Our physical health, or our spiritual health? If going blind in the shower means that I become able to see things in the Spirit more easily, then it's a win."

I do not know how many times I have applied that righteous man's words to my own life. And I am the ONLY one who can do that; if someone else comes to me in a time of trouble, and tells me that God has a plan for this, I might just punch them in the nose. That is, I believe, a false comfort. But if I take the time to  look inside, and see what is really going on, then I have a chance of making it through the most horrible circumstances.

Lots and lots of bad things have happened to me since that day in the hospital room. I haven't always handled them well. But, in the worst times, at some point, I was able to get a little bit of God's perspective on things.

And now, I can rejoice, ALONG WITH my daughter, who wrote this as today dawned:

Lord, You're holy. I praise Your Name for allowing me to be William Isaac's mother, and I dedicate my sweet boy to You.For You deserve all the praise, all the honor, all the glory, forever and ever. Amen!

And THAT right there? That is why my grandson's name is "Laughter."
Posted by Habakkuk21 at 12:08 PM