"Walking On the Sea of Clouds," Gray Rinehart

I reviewed the book on Amazon, and you can read and vote 'helpful' on the review by clicking HERE.

This isn't a repeat of the review; I just wanted to add some memories that came to the surface as I was reading the book. I DO, however, close with ONE MORE comment on an excellent bit I found in "Walking On The Sea Of Clouds."

I was born in 1953, so I was 4 years old at the time of the Sputnik launch. My chief recollection of that time was likely prompted by hearing of Nikita Khrushchev boast  "America sleeps under a Soviet moon."

It scared me goofy. I didn't WANT to sleep under a Soviet moon; I dimly recall weeping in  my mother's arms as she assured me that the moon wouldn't get me. I doubt that I really believed her; it takes a LOT to convince a four-year-old that the bogeyman he can see in the night sky is just a big ball of rock. Patient repetition did the trick, though; mothers are remarkably good at that.

At any rate, my fears shifted over from the moon to nuclear war and Soviet invasion over the next several years. The post-apocalyptic movie  'Alas, Babylon' on TV convinced me that I was going to have to fight Russians in the hallway to protect my baby sister. Fall-out shelters were designated on the city streets.

Strangely, the 'duck and cover' drills we did at school, and the time we practiced evacuation drills by walking home instead of riding the bus, were helpful, because it gave me the idea that we could do something if the Russkis began raining death from the skies. 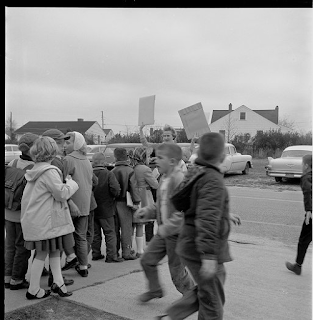 The scariest stuff got less scary, as we grew used to it. My family even got caught up in military convoys MILES and MILES long, traveling the two-lane roads between Texas and Georgia, and our only  interest was in seeing all the trucks, jeeps, and tanks motoring along and slowing traffic. I don't recall that we had any sense of fear at all; at least I didn't. I can't remember if these convoys were in response to the Berlin Crisis of 1961 or the Cuban Missile Crisis of 1962.  In 1973, I heard about them again, from an old-service Army motor-pool sergeant, when I was stationed with the 582nd Medical Company (Ambulance) at Coffey Barracks in Ludwigsburg, Germany. He said that the massive breakdown of trucks and jeeps during the convoys resulted in the Army revising their maintenance reporting, so that if we HAD to move out again, this time we'd know who was coming.

At any rate, by the time the US started to make progress in space, most of the fears just went away in the excitement. We were given the option of staying home, or going to school, to watch the early shots on television. Our first manned mission, with Alan Shepard aboard Friendship 7 and a Redstone rocket that burned moonshine for fuel, launched on my 8th birthday, on May 5, 1961.

Surely, with that much going on while I was still in the second grade, I could expect to vacation on the moon by the time I retired!

Well, not so much.

Wiser people can tell you reasons why we aren't living in the world we had hoped for; no hotels on the moon, no asteroid mining. The only humans in space are in the International Space Station, and that's good; however, for the last 7 years, they only way anybody can get there, or home from there, is by hitching a ride with the Russians. In addition to that, the lunch is catered by a private company: Spacex's Dragon brings consumables and parts needed to keep the people alive and the ISS aloft.

I am fortunate to be a correspondent with a number of the folks who worked to make it possible for four-year-old boys to grow up without being afraid that a Soviet Moon was going to eat them. That's something that can happen when you spend all your time reading and reviewing good books. The same brilliance that makes the tech WORK to allow people to comment on the Super Bowl from space, also extends to telling good stories about other things. Perhaps, if we are lucky, they will continue to infect future generations with the desire to reach out.

And, we are at the end of this blog post. As promised, though, I have one last comment to make about "Walking On the Sea of Clouds." I have quite a bit of training and experience working with people in moments of crisis. As such, I believe I can recognize motivations and stressors, usually before the client is able to put those things into words.

HOWEVER, I don't think I have EVER read a book where the author does such an excellent job of detailing inner conflict in such a way as to make the characters so decidedly sympathetic. Although the primary source of conflict is the decision to seek status as a lunar colonist or worker, other issues also receive his perceptive treatment.

It's really magnificent; I was struck immediately by the precision and compassion in Rinehart's words, as Barbara "discovered a kernel of doubt inside herself that she’d never noticed before." (Gray Rinehart. Walking on the Sea of Clouds (Kindle Location 1924). Word Fire Press.) What follows here, and in other places, is an emotional 'set' laid out with almost mathematical exactness. Every word is the right word; the sum of those words places you inside the skin of the POV character. It's simply marvellous to me; it might not be to you, if you haven't had people as your primary field of study for the past forty years. But you will enjoy it, just the same.

Peace be on your household.
Posted by Habakkuk21 at 7:18 PM