A Cat Among Dragons, by Alma T C Boykin, and Series Immersion


If you JUST want to read the Amazon review, with none of the trimmings, click here.

So, this morning I hopped out of bed at 4:00 AM, and drove our daughter Liz to the hospital, where she will shortly present us with grandchild number 12; BUT this one is a girl! We only have two other girl grandchildren, the delightful Vanessa Nicole, age 16, and precious Alicia Ann, age 11. In case you don't want to do the math, that means we have 9 grandsons, ranging from Esan at 18 to Isaac at 5 months.

In fact, I like them so much that there are three of them currently living at my house (four when the little girl comes home), and in a few minutes, my daughter who lives in Screven, in south east Georgia, will be dropping by with three year old Josh and the aforementioned 5 month old Isaac, for an all-too-brief visit. I bought donuts. 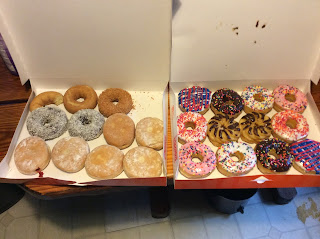 Are they not lovely? Designed to appeal to the palate of grandchildren.

And I made sausage and cheese biscuits. 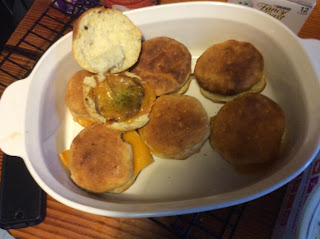 Designed to appeal to the palate of adults.

And then, as adults and children were negotiating conversation space while wiping powdered sugar and or mustard from the lips, I fell asleep. And then Trey fell asleep, and then my gift-from-God, happily-ever-after trophy wife Vanessa, the elegant, foxy, praying black grandmother of Woodstock, GA, fell asleep. In a home which is shortly going to receive a newborn, naps are a desirable commodity.

So, when I woke up, much too early, and placed the donuts into storage, I kept it quiet. They can sleep; I have a blog/review to write.

I've mentioned before that military sci-fi has been my clear favorite, at least since I discovered a frayed copy of 'Starship Troopers' in the day room of "C" Company, 2nd Battalion, while undergoing medic training at Ft. Sam Houston in 1972 -73. And so, with delight, I discovered  that , introduced at LibertyCon (which I didn't attend), was that outstanding bit of art known as "Fistful of Credits." I reviewed it here on Amazon, and blogged about it here, taking an extended and expanded view of one of the stories here.

And after that, I immediately read and enjoyed toy stories in the universe, which provide some back story; and THEN I got word of Mark Wandrey's release of "The Winged Hussars," which I obtained and began to devour, and THAT lead me to the discovery that the series goes back at least two more books which are already in print, and new ones are on the way.

Good news: I have a LOT more to read & review!

Bad news: I owe reviews to other authors.

Although I usually get one book at a time from a particular author, there are those times when I'll get several books sent my way. When that is the case, I try to be fair in my rotation. I have no research data to support my actions, but I do believe that there are advantages to alternate the authors I review. And maybe that's a discussion for  another time.

And that's the case here.I have two books which are a part of a series. One is "Winged Hussars" by Mark Wandrey; the other is "Clawing Back From Chaos," by Alma T C Boykin. Both are the most recently released book in their respective series, and in both cases, I discovered I had not been paying proper attention, because I had read NOTHING in either series. Yes, I have read and reviewed other works by Boykin, but not the Cat Among Dragons series. I am in the process of rectifying that, and as a part of that process, I will be reviewing "A Very UnCONventional Christmas," by Stephanie Osborn, and "Minutegirls," by George Phillies, both of which were provided to me in exchange for a fair review some time back.

But the crisis was precipitated by my realization that I was having a great deal of time following along with the #9 book in the series, "Clawing Back From Chaos.". That's when I discovered I was going to have to go back to the beginning. THAT'S one briar patch I will GLADLY be thrown into.

The Cat, Rada Ni Drako,  doesn't want to be among Dragons. In fact, she would prefer to be left along. However, that option is not open to her, because the Traders, which represent half of her genetic inheritance, treat her as an abomination in the very best of times. Later, the situation escalates, and an open contract is placed on her. Anyone who captures her will be able to use the reward money to live the rest of their lives in luxury.

She goes into hiding, taking the most uninteresting job she can think of: doing the laundry in a licensed brothel, under the bland name of Brownie. Even this hideaway is denied her, however, when one of the administrators seeks to place her in the bed of a disreputable type with political power. She flees, to the only place where her skills might win her the courtesy of isolation: a mercenary guild.

She has training to supplement her superior reflexes, and is quite deadly in hand-to-hand combat of almost any type. Her mixed-race heritage has provided her with some rudimentary ability to detect others by their thoughts, and in some cases, to take control of them. This makes her an excellent training officer.

Meanwhile, and clue the Traders have that she is still alive sends them into a frenzy, and they escalate their offers for her. She is forced to leave job after job until...

...until I can't tell you any more, because of spoilers.

Beautifully written; excellent & complex characters, who are forced to make changes because of the things that happen to them, which gives us the means of seeing what drives character growth. Strange, powerful, secretive forces in the background, doing for others, for unknown reasons of their own. Conflicting rules of societies, which may no longer have any survival value.

And here's what I loved: I enjoyed these characters so much, that I often found myself wondering which book I was reading. I interrupted my reading of the Four Horsemen to return to this series, but some of the events could have been taking place just a few planets over from the other series. Boykin writes fight scenes so well; I loved her tales of Elizabeth and her killer mule Snowy in the Colplatschki Chronicles.
Posted by Habakkuk21 at 4:09 PM